WASHINGTON -- In a critical step toward creating a global quantum communications network, researchers have generated and detected quantum entanglement onboard a CubeSat nanosatellite weighing less than 2.6 kilograms and orbiting the Earth.

"In the future, our system could be part of a global quantum network transmitting quantum signals to receivers on Earth or on other spacecraft," said lead author Aitor Villar from the Centre for Quantum Technologies at the National University of Singapore. "These signals could be used to implement any type of quantum communications application, from quantum key distribution for extremely secure data transmission to quantum teleportation, where information is transferred by replicating the state of a quantum system from a distance."

In Optica, The Optical Society's (OSA) journal for high impact research, Villar and an international group of researchers demonstrate that their miniaturized source of quantum entanglement can operate successfully in space aboard a low-resource, cost-effective CubeSat that is smaller than a shoebox. CubeSats are a standard type of nanosatellite made of multiples of 10 cm × 10 cm × 10 cm cubic units.

"Progress toward a space-based global quantum network is happening at a fast pace," said Villar. "We hope that our work inspires the next wave of space-based quantum technology missions and that new applications and technologies can benefit from our experimental findings."

The quantum mechanical phenomenon known as entanglement is essential to many quantum communications applications. However, creating a global network for entanglement distribution isn't possible with optical fibers because of the optical losses that occur over long distances. Equipping small, standardized satellites in space with quantum instrumentation is one way to tackle this challenge in a cost-effective manner.

As a first step, the researchers needed to demonstrate that a miniaturized photon source for quantum entanglement could stay intact through the stresses of launch and operate successfully in the harsh environment of space within a satellite that can provide minimal energy. To accomplish this, they exhaustively examined every component of the photon-pair source used to generate quantum entanglement to see if it could be made smaller or more rugged.

"At each stage of development, we were actively conscious of the budgets for mass, size and power," said Villar. "By iterating the design through rapid prototyping and testing, we arrived at a robust, small-form factor package for all the off-shelf components needed for an entangled photon-pair source."

The new miniaturized photon-pair source consists of a blue laser diode that shines on nonlinear crystals to create pairs of photons. Achieving high-quality entanglement required a complete redesign of the mounts that align the nonlinear crystals with high precision and stability.

The researchers qualified their new instrument for space by testing its ability to withstand the vibration and thermal changes experienced during a rocket launch and in-space operation. The photon-pair source maintained very high-quality entanglement throughout the testing, and crystal alignment was preserved even after repeated temperature cycling from -10 °C to 40 °C.

The researchers incorporated their new instrument into SpooQy-1, a CubeSat that was deployed into orbit from the International Space Station on 17 June 2019. The instrument successfully generated entangled photon-pairs over temperatures from 16 °C to 21.5 °C.

"This demonstration showed that miniaturized entanglement technology can work well while consuming little power," said Villar. "This is an important step toward a cost-effective approach to the deployment of satellite constellations that can serve global quantum networks." The project was funded by Singapore's National Research Foundation.

The researchers are now working with RALSpace in the UK to design and build a quantum nanosatellite similar to SpooQy-1 with the capabilities needed to beam entangled photons from space to a ground receiver. This is slated for demonstration aboard a 2022 mission. They are also collaborating with other teams to improve the ability of CubeSats to support quantum networks. 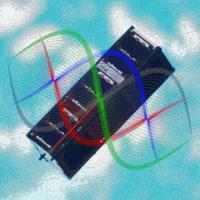 Artist's Impression of Entanglement in Satellite