By now, the research is quite fundamental. However, one of the authors, Igor Potemkin (Professor of the Chair of Polymer and Crystal Physics, Physics Department, the Lomonosov Moscow State University) argues that the creation of the perfect nano-capsules for targeted drug deliverywould be possibleon the basis of the reported system in the nearest years, and the production will be relatively cheap.

Scientists have been engaged with drug delivery systems for a long time. Many laboratories in the world are working on their creation, as the promise of this approach is enormous. A lot of "nano-carriages" for drug delivery to the right address were created, but the scientists still faced many challenges. The major among them is considered the problem of how not to let the medicine act before it gets to the right place in a body.

'Many existing carriers encapsulate drugs through the long-range electrostatic interactions -- the carrier attracts oppositely charged medicine. Our method does not deal with the electrostatics at all. Filling in the nanogel by the guest molecules, locking them in the cavity and further release arecontrolled by the temperature. Therefore, the medicines themselves can be both charged and neutral,' says one of the Russian co-authors of the article, Professor Igor Potemkin.

According to the authors, there are other tools to trigger the release of drugs, for example, an external magnetic field and pH. But in each case researchers face the problem of efficiency of the drug release.

The scientists decided to use the gel nano-capsules that were previously undervalued as the carrier systems. Their main problem, which held back the interest towards them, was that the capsules stuck together with their neighbors (lost colloidal stability) when trying to "upload" drugs. Such behavior made the delivery impossible (or ineffective). The scientists managed to solve this problem by creating a carrier, the inner cavity of which, like an egg with two shells, is surrounded by two "membranes" of different chemical structures.

The outer porous shell plays a protective (stabilizing) role and hinders aggregation of the nano-capsules, while the pores of the inner shell can open and close depending on the temperature due to the variable interactions between its monomeric units.

The way of the nanogel design was reduced to the synthesis of two nanogel shells of different chemical structuresaround the silica core. At the end of the synthesis the core was chemically dissolved, leaving only the "empty space" (cavity).

The major difficulty of this work was the fact that researchers have largely gone blindly, not knowing for sure how the nano-capsule is going to behave, whether its cavity remains stable after removal of the silicon core or it collapses, whether the size of the pore is sufficient to absorb the transported substance and then release it, and whether it is locked reliably during transportation. Fortunately, these fears proved groundless - in response to the temperature changes, the pores opened and closed. "On the road" (in the experiment, there was no actual "road"- the researchers studied the loss from the cavity with the time passing), the contents of the capsules were almost completely safe, and the inner cavity was not only stable in the shape: it became even larger than the initial size of the silicacore.

Synthesis of the nanogel capsules and the related measurements were conducted in Europe, mainly in Germany, and Russian scientists from the Lomonosov Moscow State University, Igor Potemkin and his colleague Andrey Rudov, worked on the computer modeling that allowed researchers to study the dependence of the nano-capsules' structure on the temperature. Also, the Lomonosov Moscow State University physicists simulated a way of encapsulation and release of the transported molecules under temperature variation.

At this stage, the work was purely fundamental and was intended primarily to demonstrate the effectiveness of the concept. Experiments were carried out in the temperature range of 32-42°C. It is slightly more than the temperature range favorable for a human, although in the future this range can be easily narrowed, states Igor Potemkin.

The scientific collaboration is going to be prolonged for another four years. 'There are still many questions,' the scientist says. 'For example, we have "caught" a structure in which a cavity does not collapse as the pores are closed. Now we need to understandwhy it happens, how does the density of the layers' crosslink effect, i.e., what is the minimum amount of crosslinker that does not lead to a collapse of the cavity, and so on. "

Potemkin is sure that in any case the created nano-containers are the ideal carriers for targeted drug delivery. Moreover, their synthesis is neither complex nor really expensive. Although at current stage of research it is difficult to pronounce the precise cost, the collaboration's plans already include the creation of the large-scale,commercially acceptable production of nanogels. 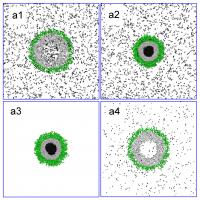 Locking and Release of the Guest Molecules