EVANSTON, Ill. -- The scientific community can relax. The electron is still round.

At least for now.

In a new study, researchers at Northwestern, Harvard and Yale universities examined the shape of an electron's charge with unprecedented precision to confirm that it is perfectly spherical. A slightly squashed charge could have indicated unknown, hard-to-detect heavy particles in the electron's presence, a discovery that could have upended the global physics community.

"If we had discovered that the shape wasn't round, that would be the biggest headline in physics for the past several decades," said Gerald Gabrielse, who led the research at Northwestern. "But our finding is still just as scientifically significant because it strengthens the Standard Model of particle physics and excludes alternative models."

The study will be published Oct. 18 in the journal Nature. In addition to Gabrielse, the research was led by John Doyle, the Henry B. Silsbee Professor of Physics at Harvard, and David DeMille, professor of physics at Yale. The trio leads the National Science Foundation (NSF)-funded Advanced Cold Molecule Electron (ACME) Electric Dipole Moment Search.

A longstanding theory, the Standard Model of particle physics describes most of the fundamental forces and particles in the universe. The model is a mathematical picture of reality, and no laboratory experiments yet performed have contradicted it.

This lack of contradiction has been puzzling physicists for decades.

"The Standard Model as it stands cannot possibly be right because it cannot predict why the universe exists," said Gabrielse, the Board of Trustees Professor of Physics at Northwestern. "That's a pretty big loophole."

Gabrielse and his ACME colleagues have spent their careers trying to close this loophole by examining the Standard Model's predictions and then trying to confirm them through table-top experiments in the lab.

Attempting to "fix" the Standard Model, many alternative models predict that an electron's seemingly uniform sphere is actually asymmetrically squished. One such model, called the Supersymmetric Model, posits that unknown, heavy subatomic particles influence the electron to alter its perfectly spherical shape -- an unproven phenomenon called the "electric dipole moment." These undiscovered, heavier particles could be responsible for some of the universe's most glaring mysteries and could possibly explain why the universe is made from matter instead of antimatter.

"Almost all of the alternative models say the electron charge may well be squished, but we just haven't looked sensitively enough," said Gabrielse, the founding director of Northwestern's new Center for Fundamental Physics. "That's why we decided to look there with a higher precision than ever realized before."

The ACME team probed this question by firing a beam of cold thorium-oxide molecules into a chamber the size of a large desk. Researchers then studied the light emitted from the molecules. Twisting light would indicate an electric dipole moment. When the light did not twist, the research team concluded that the electron's shape was, in fact, round, confirming the Standard Model's prediction. No evidence of an electric dipole moment means no evidence of those hypothetical heavier particles. If these particles do exist at all, their properties differ from those predicted by theorists.

"Our result tells the scientific community that we need to seriously rethink some of the alternative theories," DeMille said.

In 2014, the ACME team performed the same measurement with a simpler apparatus. By using improved laser methods and different laser frequencies, the current experiment was an order of magnitude more sensitive than its predecessor.

"If an electron were the size of Earth, we could detect if the Earth's center was off by a distance a million times smaller than a human hair," Gabrielse explained. "That's how sensitive our apparatus is."

Gabrielse, DeMille, Doyle and their teams plan to keep tuning their instrument to make more and more precise measurements. Until researchers find evidence to the contrary, the electron's round shape -- and the universe's mysteries -- will remain.

Unprecedented look at electron brings us closer to understanding the universe 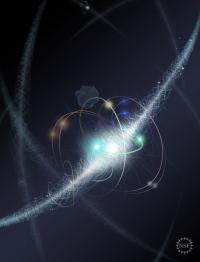 An Electron Orbits An Atom's Nucleus