FRANKFURT. Given the predicted rise in global temperatures in the coming decades, climate scientists are particularly interested in warm periods that occurred in the geological past. Knowledge of past episodes of global warmth can be used to better understand the relationship between climate change, variations in atmospheric carbon dioxide and the reaction of Earth's biosphere. An international team led by scientists from the Goethe University and the Biodiversity and Climate Research Centre in Frankfurt, Germany, has discovered an intense warming phase around 52 million years ago in drill cores obtained from the seafloor near Antarctica — a region that is especially important in climate research. The study published in the journal Nature shows that tropical vegetation, including palms and relatives of today's tropical Baobab trees, was growing on the coast of Antarctica 52 million years ago. These results highlight the extreme contrast between modern and past climatic conditions on Antarctica and the extent of global warmth during periods of elevated atmospheric carbon dioxide levels.

Around 52 million years ago, the concentration of the greenhouse gas carbon dioxide (CO2) in the atmosphere was more than twice as high as today. "If the current CO2 emissions continue unabated due to the burning of fossil fuels, CO2 concentrations in the atmosphere, as they existed in the distant past, are likely to be achieved within a few hundred years", explains Prof. Jörg Pross, a paleoclimatologist at the Goethe University and member of the Biodiversity and Climate Research Centre (BiK-F) in Frankfurt, Germany. "By studying naturally occurring climate warming periods in the geological past, our knowledge of the mechanisms and processes in the climate system increases. This contributes enormously to improving our understanding of current human-induced global warming."

Computer models indicate that future climate warming will be particularly pronounced in high-latitude regions, i.e., near the poles. Until now, however, it has been unclear how Antarctic terrestrial ecosystems responded in the geological past to a greenhouse climate with high atmospheric CO2 concentrations.

The scientists working with Prof. Pross analysed rock samples from drill cores on the seabed, which were obtained off the coast of Wilkes Land, Antarctica, as part of the Integrated Ocean Drilling Program (IODP). The rock samples are between 53 and 46 million years old and contain fossil pollen and spores that are known to originate from the Antarctic coastal region. The researchers were thus able to reconstruct the local vegetation on Antarctica and, accordingly, interpret the presence of tropical and subtropical rainforests covering the coastal region 52 million years ago.

In an area where the Antarctic ice sheet borders the Southern Ocean today, frost-sensitive and warmth-loving plants such as palms and the ancestors of today's baobab trees flourished 52 million years ago. The scientists' evaluations show that the winter temperatures on the Wilkes Land coast of Antarctica were warmer than 10 degrees Celsius at that time, despite three months of polar night. The continental interior, however, was noticeably cooler, with the climate supporting the growth of temperate rainforests characterized by southern beech and Araucaria trees of the type common in New Zealand today. Additional evidence of extremely mild temperatures was provided by analysis of organic compounds that were produced by soil bacteria populating the soils along the Antarctic coast.

These new findings from Antarctica also imply that the temperature difference between the low latitudes and high southern latitudes during the greenhouse phase 52 million years ago was significantly smaller than previously thought. "The CO2 content of the atmosphere as assumed for that time interval is not enough on its own to explain the almost tropical conditions in the Antarctic", says Pross. "Another important factor was the transfer of heat via warm ocean currents that reached Antarctica." When the warm ocean current collapsed and the Antarctic coast came under the influence of cooler ocean currents, the tropical rainforests including palms and Baobab relatives also disappeared.

The Goethe University, with its strong research focus, is based in Frankfurt, Europe's financial metropolis. It was founded 94 years ago by Frankfurt citizens and is now one of Germany's ten largest universities. On January 1, 2008 it returned to its historical roots as a university financed by foundations, guaranteeing it an exceptional degree of autonomy. And the historical ensemble of buildigns designed by Julius Poelzig back in the 1920s in Frankfurt's Westend is now the hub of what, when complete, will be Germany's most beautiful campus - the construction work will cost a total of about EUR 600 million. Since 2000, over 50 new foundation-financed professorships and visiting professorships have been established, meaning the Goethe University is again the trailblazers in Germany, and has been well up with leaders for three consecutive issues of the CHE's three research ranking table and the German Academic Excellence Initiative.

Tropical climate in the Antarctic 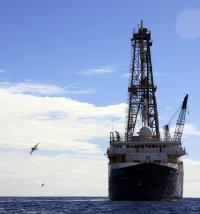