UNIVERSITY PARK, Pa. -- In 1916 and 1917, a musician and book dealer named Giovanni Concina sold three ornately decorated seventeenth-century songbooks to a library in Venice, Italy. Now, more than 100 years later, a musicologist at Penn State has discovered that the manuscripts are fakes, meticulously crafted to appear old but actually fabricated just prior to their sale to the library. The manuscripts are rare among music forgeries in that the songs are authentic, but the books are counterfeit.

Uncovering deception was not what Marica Tacconi, professor of musicology and associate director of the School of Music at Penn State, set out to do when she began her research at the Biblioteca Nazionale Marciana of Venice in 2018. While on sabbatical there, she had planned to spend the fall semester studying 'echo effects' in seventeenth-century music -- phrases that are sung by the primary vocalist and then repeated 'in echo' by one or more additional singers.

While searching the library's database for songs incorporating echo effects, Tacconi stumbled upon a peculiar book. Catalogued as being from the seventeenth century, it certainly looked the part. It was bound in worn leather and embellished with brass bosses, or metal knobs that serve to elevate and protect the book from the table surface. Inside, the paper showed some signs of deterioration, including even an occasional worm hole. The first page revealed an elaborate letter 'T,' indicating the opening of the song "Tu mancavi a tormentarmi" by Antonio Cesti. The music itself was written with heart-shaped noteheads, and the bottom of the page displayed the coat of arms of the Contarini family, one of the most prominent and influential Venetian households.

"It was a beautiful, elegantly produced book," said Tacconi. "I was immediately intrigued. But I also sensed that something was off."

Additional research led to the discovery of two more manuscripts, also sold by Concina and very similar in format, design and content. Considered as a set, the three books preserve 61 compositions by 26 Italian composers, all written during the period from 1600 to 1678. According to Tacconi, an expert on the music, art and culture of early modern Italy, typical seventeenth-century music anthologies focus on just one or a few composers.

"The books comprised a strange conglomeration of composers, from very famous ones, like Giulio Caccini, Claudio Monteverdi and Francesco Cavalli, to lesser-known names. This was unusual for the seventeenth century when music anthologies tended to be more monographic in content," she said. "In addition, seventeenth-century scribes would not have had access to such a wide range of music, as many of those pieces had not yet been printed and existed only in manuscripts that did not circulate widely."

Despite her suspicions about the authenticity of the manuscripts, Tacconi was excited about the music itself.

"The manuscripts include arias that were foundational in the history of opera -- a genre that emerged in the early seventeenth century," she said. "They include musical gems that can tell us a lot about the origins and development of opera."

Upon further close investigation, she realized that much of the music in the manuscripts had been lifted, note for note, from a number of late nineteenth-/early twentieth-century books about music.

"The music copied in the manuscripts showed some strange editorial quirks that you can see in early twentieth-century editions, but that would not have appeared in seventeenth-century sources," said Tacconi, who proceeded to conduct a detailed comparison of the manuscripts with more modern books.

This type of painstaking comparison proved to be particularly fruitful in proving the manuscripts' fabricated nature. Tacconi's knowledge of a little-known twentieth-century book in particular, Hugo Riemann's "Handbuch der Musikgeschichte" (1912), provided verification of her suspicions. For example, one of the fabricated manuscripts included the song "Torna o torna pargoletto" by Jacopo Peri, which originally appeared in Piero Benedetti's "Musiche" -- a collection of songs published in 1611. Riemann included it in his "Handbuch," but with some alterations. Tacconi noticed these small but significant variants -- a wrong note, a misspelling of a word.

"It was obvious that the fabricator copied the music from Riemann's 1912 publication and not from the 1611 print," she said. "This was the 'smoking gun,' the confirmation that these books were indeed forgeries."

Tacconi noted that the books are unique among music forgeries in that most forgeries falsify the music itself.

"While the music preserved in these books is authentic, the manuscripts themselves are the handiwork of one or more fabricators who, working with several scribes and decorators, went through extraordinary means to make the volumes appear genuine," she said. "The books were clearly designed to look like those created for important Venetian households during the seventeenth century. It's not surprising that the library staff did not recognize them as fakes. At first glance they seem authentic, but once we look closely at the music and notice the editorial quirks, we detect the subtle traces of a twentieth-century fabricator."

Tacconi said that it is impossible to know whether Concina, who died in 1946, was the mastermind behind the forgeries or if he came into possession of the books with no knowledge of their fabricated nature.

Regardless of who generated the forgeries, an important question is "Why did they do it?"

"Monetary gain was probably not the main impetus," said Tacconi, explaining that the library paid Concina the equivalent of about $220 in today's money for one of the manuscripts. "That's a relatively modest sum, which does not really justify all the time and effort that went into producing these books. Instead, what we have is possibly an example of the fabricators engaging in a desire to hoodwink the experts."

In addition, she said, the forgers could have been motivated by a love for the music and the time period. "Imitation is the sincerest form of flattery," after all.

"Twentieth-century musicians and publishers often romanticized the music of the seventeenth century as being particularly elegant, and that elegance is something you see very clearly in the visual aspects of the three manuscripts," said Tacconi. "They're beautiful and ornate; their decorations include butterflies, birds and little cupids; the notes are heart shaped. The fact that the forgers went to such an effort to portray this elegance tells us something about the forgers' attitudes about the music of this time period. Knowing now that these books were created in the early twentieth century, the manuscripts and their contents actually provide an opportunity to study the late-Romantic tradition of so-called 'arie antiche' or 'gemme antiche,' which saw music collectors, musicians and audiences alike drawn to the antiquity of Italian Baroque solo vocal music."

Tacconi's findings appear in the Spring 2021 issue of the peer-reviewed Journal of Seventeenth-Century Music, which displays full-color images of the manuscripts (https://sscm-jscm.org/jscm-issues/volume-27-no-1/three-forged-seventeenth-century-venetian-songbooks/). . 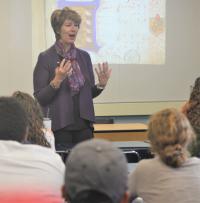