The research team led by Masakazu Ohara, graduate student of the Department of Computer Science and Engineering at Toyohashi University of Technology (student in the Leading Program doctoral program); Associate Professor Kowa Koida of the Electronics-Inspired Interdisciplinary Research Institute; and Associate Professor Juno Kim of the University of New South Wales (Australia) discovered that when people judge the thickness of an object, objects with glass-like transparent optical properties are perceived to be flatter than they actually are. It was previously known that objects made of metallic or glossy materials are perceived to be thicker than what they are, but now the current research has identified that transparent properties surprisingly have the opposite effect. The result of the analysis of image cues that contribute to judgments of thickness indicated that humans may perceive thickness based on image characteristics in the form of regional variations of local luminance contrast. With this computational model, the types of images in which the shape of 3D objects may be misinterpreted by humans can now be predicted, which may be useful for everyday applications, such as devices to assist with walking in people with low-vision or autonomous driving.

The texture of an object's surface is also extremely important for product development, because it appeals to the human senses (e.g., vision, and also touch). We can infer a lot from a texture's appearance. For example, awareness that the ground is slippery is related to the gloss and perception of a surface's material composition, but if this perceptual estimate is erroneous, an accident may occur when walking or driving. Moreover, when surface gloss or transparency is misinterpreted, the bumps on the ground may also be misinterpreted. Humans identify the texture and optical properties of a surface with just a glance, even though the neural processing required is would be complex. Accordingly, understanding the mechanism by which the eyes and brain provide our experience of texture continues to generate significant interest.

When the human brain observes an object, it attempts to process and understand the illumination that hits the object, the 3D shape of the object, and the optical properties of the surface. Certainly, images are created by physically and precisely combining these three elements. However, it remains a fundamentally difficult problem to study how these three elements are dealt with by the visual system. There have been numerous reports where perceptions are not necessarily correct. For example, if a surface is glossy and compared to a gloss-less matte surface, it has been reported that the bumps on the object should appear exaggerated (Mooney & Anderson, 2014; Published in Current Biology).

Gloss is an optical phenomenon related to the reflection of light from an object's surface. However, the property of transparent refraction is also an optical phenomenon of objects. Regardless of whether transparency is a fundamental property, investigations had yet to be performed on transparent properties and the perception of 3D objects. Therefore, this research group compared transparent properties to conventional matte and glossy surfaces to understand how different materials affect the perception of 3D shape.

Participants in the experiment viewed computer-generated spherical objects (Figure 1) displayed on a computer screen, and they were asked to estimate the thickness along the direction in depth. Numerous objects with different thicknesses and surface materials were prepared for comparison. As a result, objects constructed of a transparent material were perceived as flatter than the objects with identical shape but with different material composure (Figure 2). This effect occurred consistently even when: i) the shape of the object had bumps, ii) the virtual lighting environment was changed, iii) the size of the object was changed, iv) the object was moved left and right, and v) the object was observed with only one eye. The aforementioned results indicate that transparent properties affect human perception of 3D object shape in different ways to diffuse and specular reflection.

The research group also analyzed the images to determine what kind of cues in the object image contributed to the perception of thickness. The factor that resulted in the most accurate estimations of the perception of thickness was the amount of regional variation of local contrast in the image. Local contrast is the root-mean-square (RMS) contrast of the pixels within a small region of the image, and this computation is similar to that performed by neurons found in the early visual area of the retina and brain. The regional variation is calculated as the variation from the sum of the above RMS contrast values across a wide field of view.

The research team discovered that transparent material properties can cause the 3D shape of an object to be underestimated. However, it is unknown whether these misinterpretations are a simple error or an indirect effect of a separate mechanism altogether. The cause of the misinterpretations will need to be investigated in detail in later research.

Also, the computational model for predicting the perception of thickness is not only useful for understanding neural mechanisms of the human visual system, but it is also linked to predictions of conditions in which humans might misinterpret the shape or texture of objects.

Errors in interpreting the evenness of a surface or whether surfaces are frozen can lead to accidents when walking or driving a car. In situations where the gloss, transparency, or bumps of a 3D object can be misinterpreted, it can be expected that the computational model could be used in devices to assist with mobility when walking, such as smart glasses, or semi-autonomous driving functions to caution drivers in advance of an accident. 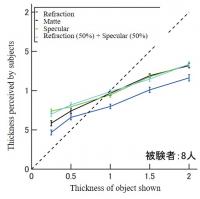