Researchers have come up with a device that may enable people who are completely unable to speak or move at all to nevertheless manage unscripted back-and-forth conversation. The key to such silent and still communication is the first real-time, brain-scanning speller, according to the report published online on June 28 in Current Biology, a Cell Press publication.

The new technology builds on groundbreaking earlier uses of fMRI brain scans to assess consciousness in people described as being in an unconscious, vegetative state and to enable them to answer yes and no questions. fMRI (or functional magnetic resonance imaging) is typically used for clinical and research purposes to track brain activity by measuring blood flow.

"The work of Adrian Owen and colleagues led me to wonder whether it might even become possible to use fMRI, mental tasks, and appropriate experimental designs to freely encode thoughts, letter-by-letter, and therewith enable back-and-forth communication in the absence of motor behavior," said Bettina Sorger of Maastricht University in The Netherlands.

The new evidence shows that the answer to that thought question is yes. Sorger's team came up with a letter-encoding technique that requires almost no pre-training. Participants in their study voluntarily selected letters on a screen, which guided the letter encoding; for each specific character, participants were asked to perform a particular mental task for a set period of time. That produced 27 distinct brain patterns corresponding to each letter of the alphabet and the equivalent of a space bar, which could be automatically decoded in real-time using newly developed data analysis methods.

In each communication experiment, participants held a mini-conversation consisting of two open questions and answers. Everyone the researchers tested was able to successfully produce answers within a single one-hour session.

The results substantially extend earlier uses of fMRI, which allowed individuals to answer the equivalent of multiple-choice questions having four or fewer possible answers, by enabling free-letter spelling. That could make all the difference for people who are completely paralyzed and unable to benefit from other means of alternative communication, Sorger says.

Ultimately, she says their goal is to transfer the fMRI technology they've developed to a more portable and affordable method for measuring blood flow, such as functional near-infrared spectroscopy (fNIRS).

With mind-reading speller, free-for-all conversations that are silent and still 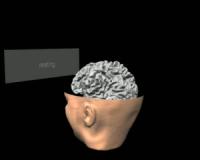 With Mind-Reading Speller, Free-for-All Conversations that Are Silent and Still (1 of 2)