After three years of intensive data-gathering and careful drawing, the mapmakers' work was complete.

The complex terrain they charted, with all its peaks, valleys and borders, is only about half an inch long and weighs less than a jellybean: the brain of the laboratory mouse.

In a paper published today in the journal Cell, the Allen Institute mapmakers describe this cartographical feat -- the third iteration of the Allen Mouse Brain Common Coordinate Framework, or CCFv3, a complete, high-resolution 3D atlas of the mouse brain.

The framework is meant to be a reference point for the neuroscience community, its creators said. Mice are widely used in biomedical research. Their brains contain approximately 100 million cells each across hundreds of different regions. As neuroscience datasets grow larger and more complex, a common spatial map of the brain becomes more critical, as does the ability to precisely co-register many different kinds of data into a common 3D space to compare and correlate.

Think of it as the neuroscience equivalent of your phone's GPS. Instead of manually searching for your location on a paper map based on what you see around you, the GPS (and the new brain atlas) tells you where you are. With datasets in the thousands or millions of different pieces of information, that common set of coordinates -- and pinpointing the corresponding brain landmarks for those coordinates -- is crucial.

The whole-brain CCFv3 builds on a partial version released in 2016 that mapped the entire mouse cortex, the outermost shell of the brain. Previous versions of the atlas were lower resolution 3D maps, while CCFv3's resolution is fine enough that it can pinpoint individual cells' locations. The latest full-brain atlas has been openly available for the community since late 2017, and several different neuroscience teams have already put it to use.

Nick Steinmetz, Ph.D., an Assistant Professor at the University of Washington and an Allen Institute for Brain Science Next Generation Leader, used the atlas in a recent study that looked at neuron activity as mice choose between different images they see in a laboratory test. The study used Neuropixels, tiny electrical probes that can capture the activity of hundreds of neurons at once across several different brain regions.

As they were analyzing their data, it became clear that more parts of the brain were involved in this visual choice than they previously realized, Steinmetz said. They would have to take a big-picture view, and the CCFv3 helped them look at all their results together.

"The atlas was a really necessary resource that enabled the very idea of doing studies at the brain-wide level," Steinmetz said. "When you're recording from hundreds of sites across the brain, that introduces a new scale of investigation. You have to have a bigger view of where all the recording sites are, and the CCF is what made that possible."

To make the atlas, the researchers broke up the brain into tiny virtual 3D blocks, known as voxels, and assigned each block a unique coordinate. The data that fed into that 3D construction came from the average brain anatomy of nearly 1,700 different animals. The team then assigned each of those voxels to one of hundreds of different known regions of the mouse brain, drawing careful borders between distinct areas. The datasets that fed into these two aspects of the atlas came from several different kinds of experiments conducted at the Allen Institute over the past several years -- the atlas's backbone of different types of data makes it unique among reference brain atlases, the researchers said.

Historically, brain atlases were drawn in 2D, taking sheet-like views of the brain at different depths and lining them up. For some types of data, this form of brain mapping works well. But for modern neuroscience studies looking at neuron activity or cell characteristics across the entire brain, a 3D atlas gives better context.

The researchers said future iterations of the atlas will likely rely on machine learning or other forms of automation, rather than the laborious manual curation that went into the current version.

"As we know now, atlases should be evolving and living resources, because as we learn more about how the brain is organized, we will need to make updates," Harris said. "Building atlases in an automatic, unbiased way is where the field is likely moving."

A new high-resolution, 3D map of the whole mouse brain 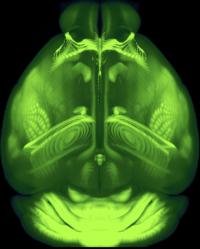