A newly discovered collection of rare dinosaur tracks is helping scientists shed light on some of the biggest animals ever to live on land.

Hundreds of footprints and handprints made by plant-eating sauropods around 170 million years ago have been found on the Isle of Skye in Scotland.

The discovery - which is the biggest dinosaur site yet found in Scotland - helps fill an important gap in the evolution the huge, long-necked animals, which were the biggest of the dinosaurs.

Scientists at the University of Edinburgh identified the tracks in layers of rock, which would have been at the bottom of a shallow, salt water lagoon when the prints were made.

By analysing the structure of the footprints, the team found that the dinosaurs were early, distant relatives of more well-known species, such as Brontosaurus and Diplodocus. The Skye dinosaurs likely grew to at least 15 metres in length and weighed more than 10 tonnes.

The footprints - the largest of which is 70 cm in diameter - are the first sauropod tracks to be found in Scotland. Until now, the only evidence that sauropods lived in Scotland came from a small number of bone and teeth fragments.

Fossils from the Middle Jurassic Period are extremely rare, and the Isle of Skye is one of the few places in the world where they can be found.

The discovery is helping scientists to reimagine the habitats and lifestyles of the world's biggest dinosaurs. Together with similar tracks found recently in other parts of the world, the Skye trackways reveal that sauropods spent lots of time in coastal areas and shallow water. It was previously thought that large dinosaurs were purely land-dwellers.

A University of Edinburgh-led team found the trails during fieldwork in collaboration with Skye's Staffin Museum and other Scottish institutions.

The study, published in Scottish Journal of Geology, was supported by the University of Edinburgh and the Royal Zoological Society of Scotland.

Dr Steve Brusatte, of the University of Edinburgh's School of GeoSciences, who led the study, said: "The new tracksite from Skye is one of the most remarkable dinosaur discoveries ever made in Scotland. There are so many tracks crossing each other that it looks like a dinosaur disco preserved in stone. By following the tracks you can walk with these dinosaurs as they waded through a lagoon 170 million years ago, when Scotland was so much warmer than today."

Dr Tom Challands of the School of GeoSciences, who took part in the discovery and research, said: "This find clearly establishes the Isle of Skye as an area of major importance for research into the Mid-Jurassic period. It is exhilarating to make such a discovery and being able to study it in detail, but the best thing is this is only the tip of the iceberg. I'm certain Skye will keep yielding great sites and specimens for years to come."

Fossil dinosaur tracks give insight into lives of prehistoric giants 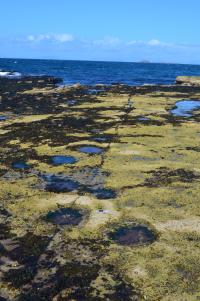