Researchers at the University of California San Diego have developed a test that uses children's ability to assemble LEGO pieces to assess their spatial visualization ability. Spatial visualization is the ability to visualize 3D shapes in one's mind, which is tied to increased GPAs and graduation rates in STEM college students.

One tool to increase spatial visualization skills among college students is a mobile app, called Spatial Vis, which allows students to sketch 2D and 3D shapes on a touchscreen and was developed based on research at UC San Diego.

However, the researchers Lelli Van Den Einde and Nathan Delson, both teaching professors at the UC San Diego Jacobs School of Engineering, feel that it would be beneficial to start teaching spatial visualization skills at younger ages. Indeed, during the COVID19 pandemic they have seen increased requests for use of Spatial Vis by middle school and high school teachers because it works well for remote instruction. One challenge to overcome to enable the teaching of these skills is how to assess spatial visualization ability at lower grade levels.

At the college level, a widely used assessment is the Purdue Spatial Visualization Test: Rotations, or PSVT:R, which is a 20-minute timed test consisting of a series of multiple-choice questions that are geared towards students 13 and older. Van Den Einde and Delson wanted to develop an assessment that would be more suitable and engaging for students at lower grade levels. They turned to LEGO, which was designed with that younger age range in mind and is familiar to many children. To pass the test, students have to assemble a set of LEGO pieces into a specific shape, such as a whale or a small plane, while only being given a picture of the final shape but no step-by-step instructions. The time it takes students to build the correct solution is the metric used for assessment.

Van Den Einde and Delson, along with Jessica Tuazon, Development Engineer, and Daniel Yang, PhD student, will present the LEGO Assembly test at the American Society for Engineering Education conference, held virtually June 22 to 26. In order to validate the test, the researchers had students in two freshman engineering graphics courses take both the LEGO assembly test and the PSVT:R. Students took the tests both at the beginning and end of the quarter. During the course, they were trained with the Spatial Viz app. Test results show a statistically significant correlation between outcomes on the LEGO test and the PSVT:R.

Delson added that the LEGO test shows that younger students get a tangible benefit from using Spatial Vis and improve their spatial visualization skills.

Van Den Einde and Delson cofounded eGrove Education Inc. to commercialize spatial visualization training. The Spatial Vis app is used by over 120 schools and 2000 students. The two UC San Diego teaching professors are now working on a version for lower grade levels to meet the demand which has increased due to remote instruction.

The app includes automatic grading of student sketches, and hints when students are stuck. The researchers will be modifying their hint feedback, so the app is more suitable for K-12 students and encourages students to be persistent and solve assignments with only minimal hints. 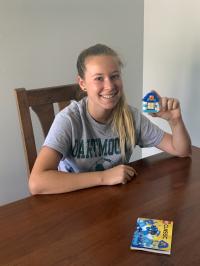 Student with the Finished Figurine 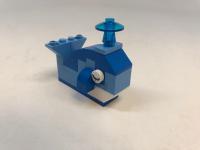