Neurons control blood flow in tiny vessels in the brain, but researchers know little about this relationship. Now a team of Penn State engineers has found a connection between nitric oxide expressing neurons and changes in arterial diameters in mice, which may shed light on brain function and aging.

The researchers looked for a way to turn neurons off and on so that they could determine which neurons dilated the blood vessels.

"We knew that when animals run, all the neurons become more active and this causes the blood vessels to react," said Drew. "There are excitatory and inhibitory neurons and there is some evidence that if you stimulate inhibitory neurons you get vasodilation, but there are lots of inhibitory neuron types. We wanted to find out which ones were responsible."

The researchers used two-photon microscopy to look at the surface and deep arteries in the somatosensory cortex of mice while the mice were awake. They were able to make multiple observations of the same arteries in the same animals over a series of different neural perturbations, so they could compare results in individuals rather than across individuals. They reported their results in eLife.

"Thirty years ago people realized that nitric oxide is a vasodilator," said Drew. "Other researchers have seen an enzyme of nitric oxide stimulate a subset of neurons giving us a hint that this could help locate the responsible neurons."

Drew and his team showed that with an increase or decrease of the nitric oxide enzyme there was a change in dilation without there being a change in electrical activity. According to Drew, the brain is oversupplied with oxygen, so an increase in dilation when running or for other reasons is not necessarily to increase oxygen supply.

"The changes do not seem to be linked with need," said Drew. "It is a mystery why it happens."

Because the researchers could track changes in the same blood vessel over time and with different stimuli, they could compare these changes to the baseline in the individual animals. They could also inhibit certain groups of neurons for various lengths of time.

"Our results suggest a model where approximately half of the dynamic range in the basal and evoked blood arterial diameter is controlled by a small group of neurons and the rest is controlled by other neurons and astrocytes," the researchers report. "Any damage to or dysfunction of nNOS neurons (producing nitric oxide enzymes) could result in decreased basal blood flow, regardless of the metabolic need."

The researchers also noted that changes in the diameter of blood vessels affects the amplitude of fmri signals. Because fmri is used to image blood vessels in animals and humans, this can produce signals not related to neural activity.

"This tells us that fmri signals may not represent overall activity," said Drew. "It suggests that if these neurons die, it might cause the development of dementia." 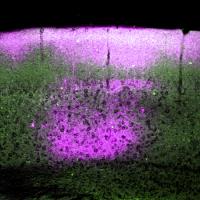