Tropical Storm Felicia is closing in on the Hawaiian Island chain and its center is now expected to pass just north of the big island before moving through the islands Tuesday and Wednesday. Two NASA satellites captured the height and temperatures of Felicia's clouds to assist meteorologists in their forecasts as she approaches Hawaii. She's already stirring up the surf.

The Central Pacific Hurricane Center in Honolulu, Hawaii noted in their discussion "a large swell generated by Felicia is already affecting the main Hawaiian islands. This swell will continue to build across the state today and tonight. Also...regardless of the intensity of Felicia when it reaches the Hawaiian Islands...locally heavy rainfall is still expected to occur and flash flooding remains a possibility."

What's it like to see a tropical storm from space and from the side? NASA has the answers, thanks to two satellites: CloudSat, that takes a "profile" view of a storm, and Aqua, that sees it from the top down. Those are just two of NASA's earth-watching satellites that are helping forecasters calculate what Tropical Storm Felicia's strength will be when it impacts the Hawaiian Island chain late tonight, August 10.

NASA's CloudSat satellite's Cloud Profiling Radar captured a side view of Felicia on August 9 at 7 p.m. EDT (23:00 UTC). The image indicated Felicia's cloudtops are almost 13 kilometers (8 miles) high, down about 2 kilometers over the last several days, which indicates a weakening storm. Higher clouds indicate stronger uplift in a storm, and a more powerful hurricane.

Meanwhile, another satellite and instrument are taking Felicia's cloud temperatures from space. The Atmospheric Infrared Sounder (AIRS) is an instrument that flies aboard NASA's Aqua satellite and takes infrared images that reveal temperatures of clouds. NASA false-colors the images to show temperature differences, and the lowest temperatures (in purple) are associated with high, cold cloud tops that make up the top of the area of low pressure. Those temperatures are as cold as or colder than 220 degrees Kelvin or minus 63 degrees Fahrenheit (F). The blue areas are around 240 degrees Kelvin, or minus 27F. Felicia's cloud top temperatures are mostly blue, indicating lower clouds.

On August 10, at 11 a.m. EDT (5 a.m. Hawaii Time) Felicia had maximum sustained winds near 45 mph, and is expected to continue weakening as it affects Hawaii. It was moving west near 12 mph, and had a minimum central pressure near 1005 millibars. It was located about 3225 miles east of Hilo, Hawaii near 20.5 north and 150.2 west.

Increasing upper level winds continue to batter at Felicia, further weakening the tropical storm. Those winds will continue and Felicia is expected to drop to a tropical depression by late tonight, Aug. 10 or early on Aug. 11 despite traveling through warm ocean waters.

Residents can expect large ocean swells, gusty winds and heavy downpours over the next couple of days. 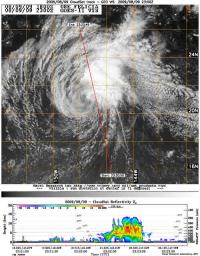