The day before the child's death was not a pleasant one, because it was not a sudden injury that killed the 10-13 year old child who was buried in the medieval town of Ribe in Denmark 800 years ago. The day before death was full of suffering because the child had been given a large dose of mercury in an attempt to cure a severe illness.

This is now known to chemist Kaare Lund Rasmussen from University of Southern Denmark – because he and his colleagues have developed a new methodology that can reveal an unheard amount of details from very shortly before a person's death. Mercury is of particular interest for the archaeologists as many cultures in different part of the world have been in contact with this rare element.

"I cannot say which diseases the child had contracted. But I can say that it was exposed to a large dose of mercury a couple of months before its death and again a day or two prior to death. You can imagine what happened: that the family for a while tried to cure the child with mercury containing medicine which may or may not have worked, but that the child's condition suddenly worsened and that it was administered a large dose of mercury which was, however, not able to save its life", says Kaare Lund Rasmussen.

The detailed insight into the life of the child did not come from analyses of the child's bones. Instead Kaare Lund Rasmussen and his colleagues have developed a method to extract information from the soil surrounding the body of the dead child in the cemetery in Ribe, Denmark.

"When the body decays in the grave a lot of compounds are released to the surrounding soil – by far most of them organic compounds. Also most of the inorganic elements are transformed to other compounds and later removed by the percolating groundwater throughout the centuries that follows. If we can localize an element in the soil in the immediate vicinity of the skeleton which is not normally found in the soil itself, we can assume that it came from the deceased and this can tell us something about how the person lived. We are not interested in death, but in the life before death", Kaare Lund Rasmussen explains.

Mercury in particular is worth looking for, he explains. This element is very rare in normal soil, but has been used in several cultures worldwide, and it is therefore expected sometimes to be found in archaeological excavations in a variety of places like Italy, China, Central America and - as it appears - also in medieval Denmark. In medieval Europe mercury was used for centuries in the colour pigment cinnabar, which was used for illuminating manuscripts by medieval monks, and since Roman times mercury was widely used as the active ingredient in medicine administered against a variety of diseases.

"Mercury is extremely toxic and surely some died from mercury poisoning and not the ailment it was meant to cure. Treatment with mercury was practiced well into the 1900's, where for instance the Danish novelist Karen Blixen (Seven Gothic Tales) received treatment in 1914", says Kaare Lund Rasmussen.

"Concerning past archaeological excavations it is appalling to think about all the soil that archaeologists have wheel barrowed away for more than a century – if we had samples of this soil, we would have access to a lot of important information", he says.

The soil samples must be taken precisely in the position of the original tissue, e.g. inner organs or muscle tissue where there is now only soil to be seen.

"At the position of a kidney, which is now completely decayed, compounds originally sitting in the kidney tissue are now part of the soil, if it has not been transported away by the groundwater. If there was mercury present in the kidney at the time of death it would have been transformed rapidly to mercury sulphide which is very immobile and undissolvable in water. So in this way we can obtain information about the deceased even though we do not analyse the bones", Kaare Lund Rasmussen explains.

In the town of Ribe the chemists have been assisted by anthropologists to take soil samples from the places originally occupied by the mercury poisoned child's lungs, kidneys, liver and muscle tissue. As the half-life of mercury varies between the different tissue types, Kaare Lund Rasmussen can ascertain when the body was last exposed to mercury prior to death.

"When we found high mercury concentrations in the soil that had once been the lungs of the child, we could conclude that the child probably was exposed to mercury within the last 48 hours or so before its death" says Kaare Lund Rasmussen.

It is also possible to test the bones for their content of excess mercury, and this technique has been used by archaeologists for several years now.

"But there are certain limitations to what the bones can reveal; while the soil give insight into the last months and days before death, the bones can only give information about the mercury exposure from ca. ten to three years prior to death", Kaare Lund Rasmussen explains.

Kaare Lund Rasmussen and his colleagues have used their newly developed sampling technique on soil samples from 19 medieval burials in the cemeteries Lindegaarden in Ribe and Ole Wormsgade in Horsens, Denmark.

The results are published in the journal Heritage Science, 2013,1:16.

This press release was written by press officer Birgitte Svennevig.

1: The principles of taking soil samples for mercury analysis. The holes show the positions of soil samples taken in the mid-plane of compacted corpse. The holes are placed in the position of the lungs, liver, kidney and the muscles of the upper arm. Photo: County Museums of Odense. 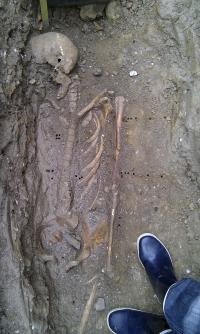 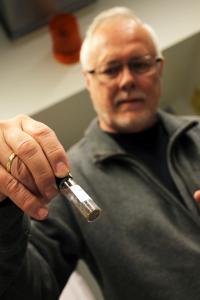