How did some marine fish manage to make their way from the salty sea to the newly available freshwater niches after the last ice age and eventually differentiate from their marine brethren?

It comes down genetics -- and diet, according to a team of scientists at the Research Organization of Information and Systems (ROIS) in Japan. The study is published on May 30 in the journal Science.

"One of the underappreciated constraints for freshwater colonization by marine animals is the poor nutritional quality of food in freshwater ecosystems," said Jun Kitano, the study's author and professor in the Ecological Genetics Laboratory at the National Institute of Genetics, part of ROIS, "Generally, the food chain in marine environments is rich in the omega-3 fatty acid DHA, which is essential for animal development and health. However, freshwater ecosystems contain very little DHA."

Kitano, along with lead author Asano Ishikawa, and his team compared the genomes of freshwater stickleback to marine stickleback, a small fish with three spines on the back.

They found that freshwater Three-Spined Stickleback has multiple copies of a gene called Fads2, which helps synthesize DHA. With more copies of the gene, the fish can synthesize more DHA, compared to their marine cousins who have an abundance of DHA available in their diet.

To further test this theory, the researchers developed a genetic mutant of the marine stickleback that over-expresses Fads2. It synthesized more DHA and demonstrated a longer lifespan than control marine stickleback, providing further evidence that the genetic ability to make use of available DHA dictates where fish colonize.

"It's unclear when the genetic advantage appeared," Kitano said. "It may be that ancient extinct freshwater species possessed additional Fads2 copies somewhere in the genome or adapted to DHA-deprived diets through other mutations."

According to Kitano, it could also be that multiple copies of the gene allowed some versions to acquire new functions, such as a way to better synthesize DHA.

The Fads2 gene may allow certain selections in species beyond the stickleback, as it also appears at higher rates in fishes that colonized freshwater. A previous study also showed signatures of natural selection in humans that colonize polar regions.

"It certainly appears to be an important gene beyond fish, in a wide variety of organisms, including humans," Kitano said.

This work is supported by the Research Organization of Information and Systems, the Japan Society for the Promotion of Science, the Asahi Glass Foundation, the Sumitomo Foundation, and the Swiss National Science Foundation. 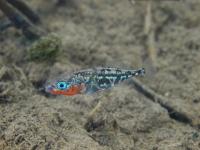