Newly published in the journal Ecography, the study shows that the wildlife that went extinct during the period, including the sabre-toothed cat, cave and American lions and the American cheetah, lost the greatest proportion of their prey. Big cats today face the same challenges and food shortages as their ancestors and without immediate action, the same fate could likely be inevitable.

Led by scientists from the Universities of Sussex, Oxford's Wildlife Conservation Research Unit (WildCRU), Aarhus and Goteborg, the team assessed several Ice Age extinction factors and whether they could be applied to big cat species populations today. Using a new global database of felid diets called FelidDiet, the team uncovered the cause of extinction of several Ice Age giants. The findings show that if these animals were alive today, on average, just 25% of their preferred prey still remain in the natural world, with the majority now extinct, partly due to human interference. The team believe this devastating loss of prey species was a major contributing factor to the extinction of these animals.

Addressing the question of what impact similar prey declines in natural big cat ranges would have today, the research has revealed that only 39% of the African lion's prey and 37% of the Sunda clouded leopard's would remain.

The paper ends with a grave warning that if this prey loss trend continues all affected species will face 'a high risk of extinction.'

Dr Chris Sandom, who conceived the study at Oxford's WildCRU, before joining the University of Sussex, said: 'Our research clearly shows that if primary big cat prey continues to decline at such a rate then big cats, including lion, tiger, leopard and cheetah, are at risk.

'Where prey species have, or are likely to become extinct, this poses a serious risk to the big cat species which feed on them and we now know this is the continuation of an unhappy trend which began during the last Ice Age. We need to buck this Ice Age trend once and for all and to reinforce the urgent need for governments to protect both big cat species and their prey.'

Professor David Macdonald, Director of the WildCRU unit, said: 'the fairytale consequences of Old Mother Hubbard's cupboard being bare are all too vividly real for modern big cats. Our study of the consequences of prey loss - 'defaunation' in the jargon - is about, in everyday language "what if" or perhaps better "if only": without the extinctions of the Pleistocene, in which the fingerprints of humanity are all too incriminating, there would have been between one and five more felid species in most places today'. He added, 'The Churchillian aphorism that those that fail to learn from history are doomed to repeat it was painfully in mind when we saw how many of the prey of lions and in East Africa and of clouded leopards in Indo-Malaya look set to go down the same drain which their counterparts in other regions have already been flushed.'

Dr Dawn Burnham, another WildCRU co-author, added: 'NIMBYISM has taken its toll on our own part of the world where today only the Eurasian lynx represents biggish cats in Western Europe, our calculations suggest there would have been at least three more large felids had the prey species survived to sustain them'.

The study entitled: "Learning from the past to prepare for the future: Felids face continued threat from declining prey richness" has been published in the journal Ecography and can be found here.

This project was conceived by Dr Chris Sandom while at WildCRU, and grew out of a collaboration between Professor David Macdonald and Professor Kathy Willis which was originally funded by the Oxford Martin School. 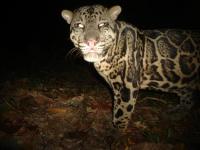