The Indian Purple frog skeleton undergoes dramatic transformation as tadpoles clinging to underwater rocks become adults digging their way underground, according to a study published March 30, 2016 in the open-access journal PLOS ONE by Gayani Senevirathne from the University of Peradeniya, Sri Lanka, and colleagues.

The Endangered India Purple frog is very unusual among amphibians. Whilst most frog tadpoles hatch into streams and swim, the Indian Purple frog's young instead cling to rocks underwater. Then, unlike most amphibians which spend their adult life on land and in water, the adult frogs dig underground and spend their life there, only emerging to reproduce in forest streams. The authors of the present study used staining techniques to document the bone and cartilage changes which allow rapid transformation of the frogs from clinging tadpoles to digging adults.

They found that in the tadpole skeleton, extensive modifications allow the development of a large suckered mouth, enabling them to withstand strong stream currents without being washed away. As they become adults, their digits and limb bones undergo dramatic morphological changes to allow them to dig. The tadpoles of the Indian Purple frog retain their clinging-mouthparts for an unusually long time, until their limbs are fully ready to dig, and they only finalize the transition to adulthood once resting underground.

"For these remarkable frogs, being clinging and digging specialists seems to have enabled them to survive since the Jurassic", says co-author Madhava Meegaskumbura.

The authors did not directly compare the observed morphological changes to those of other frog species. Nonetheless, as co-author S D Biju notes, these insights into the frog's development, "enable a better understanding of its ecological adaptations and provide useful information for conservation of this Endangered species and its vanishing habitats".

In your coverage please use this URL to provide access to the freely available paper: http://dx.plos.org/10.1371/journal.pone.0151114

Funding: This research was supported by grants to SDB from People Trust for Endangered Species (PTES), London, Evolutionarily Distinct and Globally Endangered species (EDGE), London, and DU/DST '2015/868,' Government of India; and University of Delhi R&D 2007/130, 2007/858, 2008/302. MM is supported by the National Research Council (NRC-11-124). The funders had no role in study design, data collection and analysis, decision to publish, or preparation of the manuscript. 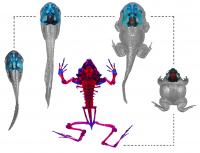