An obscure species of beetle has shown how brilliant white paper could be produced in a completely new way. A team from Imerys Minerals Ltd. and the University of Exeter has taken inspiration from the shell of the Cyphochilus beetle to understand how to produce a new kind of white coating for paper.

The Cyphochilus beetle has a highly unusual brilliant white shell. In 2007, research by the University of Exeter and Imerys Minerals Ltd., published in leading journal Science, revealed how the beetle produced its brilliant whiteness using a unique surface structure. Native to south-east Asia, it is believed that the beetle's whiteness evolved to mimic local white fungi as a form of camouflage.

New research, now published in the journal Applied Optics, shows how some of the beetle's shell structure can be mimicked to produce coatings for white paper.

At one 200th of a millimetre thick, the beetle's scales are ten times thinner than a human hair. Good quality white paper is coated with a mixture of white mineral particles such as calcium carbonate and kaolin. Using conventional production methods, industrial mineral coatings for high quality paper would need to be twice as thick as the beetle shell to be as white.

The team has now shown that through careful mineral selection and processing, it is possible to mimic some of the structure of the white beetle's shell to produce an enhanced bright white coating for paper. This higher performance could result in lighter weight paper with a very high degree of whiteness. Lighter paper would also reduce transportation costs, simultaneously reducing the economic and environmental cost of manufacture.

Colour in both nature and technology can be produced by pigmentation or by very regularly arranged layers or structures. Whiteness, however, is created through a random structure, which produces 'scattering' of all colours simultaneously. Studies of the beetle's body, head and legs showed them to be covered in long flat scales, which have highly random internal 3D structures. These irregular internal forms are the key to its uniquely effective light scattering. By balancing the size of the structures with the spacing between them, they scatter white light extremely efficiently.

The key to producing the optimal white coating for paper is in the design of the constituent mineral particles. "White paper coatings must provide the right balance between the size, number density and separation of the scattering units in the coating – as found in the beetle's scales", said Dr Benny Hallam, Application Support Manager of Imerys Pigments for Paper Europe Technology Group. Some of the beetle's design protocols could be utilised already with tailor-made mineral designs such as Imerys' CarboFlexTM range. The company is now planning to assess the feasibility of taking these design protocols to the next level in order to produce beetle-inspired ultra-white coatings on a large scale.

Meanwhile, the University of Exeter team, led by Professor Pete Vukusic, is investigating the massive diversity in the way in which whiteness is produced across the animal and plant world, far beyond just that of the Cyphochilus beetle. They have so far identified and investigated a series of natural systems that reveal distinctly different ways of producing effective ultra-whiteness. These are inspiring additional surface appearance and functional applications in a range of technologies and industries.

Benny Hallam of Imerys Minerals Ltd. continued: "It is interesting to consider that clues found in a small, obscure beetle could find application in large-scale industry. Taking this concept forward is an interesting challenge, but we have good ideas about our next steps and, if successful, feel that such developments might have profound implications for future commercial white coatings."

Professor Pete Vukusic of the University of Exeter said: "Natural systems are packed with inspirational designs that have evolved to serve key biological functions. Developing scientific knowledge about where to look and then how to take technological or industrial insight from them is an increasingly important practise, especially in this current financial climate. On this occasion, the Cyphochilus beetle has bridged the distance between university research and industrial application. There are a great many other natural systems awaiting discovery or detailed study that will certainly do the same."

The world leader in adding value to minerals, Imerys is active in 47 countries through more than 260 industrial and commercial sites. Imerys mines and processes minerals from reserves with rare qualities in order to develop solutions that improve its customers' product performance and manufacturing efficiency. The Group's products have a great many applications in everyday life, including construction, personal care, paper, paint, plastic, ceramics, telecommunications and beverage filtration.

Exeter is a top 10 UK university which combines world leading research with very high levels of student satisfaction. It is one of the UK's most popular and successful universities with campuses in Exeter, Devon, and near Falmouth in Cornwall. The University also has a permanent office in Dubai.

To find out more about Professor Vukusic's Natural Photonics research group at the University of Exeter: http://newton.ex.ac.uk/butterflies 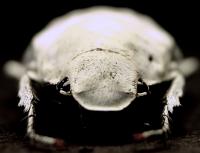