Electric eels temporarily paralyze their prey by shocking them with electricity using a series of brief, high-voltage pulses, much as a Taser would do. Now, a researcher reporting in the Cell Press journal Current Biology on October 28 has discovered that the eels can at least double the power of their electrical discharge by curling up their bodies. In bringing their tail up and around, the eels sandwich prey between the two poles of their electric organ, which runs most of the length of their long, flexible bodies.

This ability apparently enables the eels to handle larger, struggling prey or prey items that are held precariously; they don't bother doing it to eat smaller, feeder fish. While people have surely observed electric eels curling around prey items in captivity before, the researcher says that the effects of this behavior had apparently never before been measured or described.

"I'm personally amazed at this animal," said Kenneth Catania of Vanderbilt University. "Historically, they've been considered very unsophisticated, primitive creatures that shock their prey. To see them manipulate their electric field and do these more intricate things is really amazing."

Catania captured the eels' stereotyped curling behavior on film (see video). Those films show that the eels always curl up in a very particular way. The behavior is common in smaller eels when handling prey that are large relative to their size and in bigger eels when dealing with large fish. Eels also resort to curling up when handling more difficult prey items, such as large crayfish.

After observing this behavior repeatedly, Catania wanted to know what it did for the eels in terms of the electric field delivered to those prey. To find out, he rigged a dead fish with electrodes and presented it to eels, shaking the fish's body with an attached wire to simulate a struggle. The behavioral tests were a lot like a game of tug of war.

"I kind of joke that it was my eel chew toy," Catania said. "If you've got a dog and play with it, they get really excited. It wasn't exactly the same, but it reminds me of that. The eels go after it if you shake the wire to imitate the prey moving. They do the whole behavior as if holding a struggling prey item."

The measurements showed that curling greatly increased the electric field strength within prey, delivering at least double the shock. Further study showed that a shock of that size causes profound muscle fatigue and loss of contractile force in the prey. That jives with video recordings showing that formerly struggling prey are temporarily immobilized after this form of attack.

"Each of these pulses the eel gives off is activating the nervous system of the prey," Catania said. "The eel essentially has remote control over the prey's muscles and runs them to exhaustion, leaving the prey temporarily helpless."

Catania says he's now interested to learn more about what electric eels actually eat in their native environments in the Amazon. He also wants to know how the eels manage to avoid shocking themselves, even as they stick their own heads between the two poles of their electric organs.

This work was supported by the National Science Foundation and a John Simon Guggenheim Fellowship.

Electric eels curl up to deliver even more powerful shocks 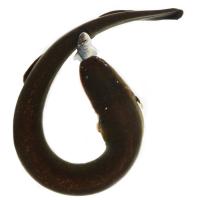 Effect of Eel Curling on Prey