An international team of marine researchers led by Dr Neo Mei Lin and Associate Professor Peter Todd from the National University of Singapore (NUS) has recently published a comprehensive study on the status of giant clams worldwide. Between 2014 to 2016, the scientists involved in this massive endeavour re-examined and updated the taxonomy, distribution, abundance, and conservation status of all species of giant clams.

The study, funded by the National Parks Board of Singapore, found that the world's largest giant clam species, Tridacna gigas, is the most threatened mollusc. About half of its wild populations are either severely decimated or no longer exist at sites where they were previously found.

Its smallest cousin, Tridacna crocea, commonly known as the burrowing giant clam or boring giant clam, is the least threatened, as it remains relatively abundant in the Indo-Pacific area despite ongoing fishing activities.

The results of the study were recently reported in the 55th volume of a leading marine publication Oceanography and Marine Biology: An Annual Review on 22 November 2017.

Giant clams, the world's largest living shellfish, are multi-tasking marine ecosystem engineers who build and shape reefs, filter water, and provide food for fellow reef creatures. They are predominantly found in the Indo-Pacific region, and the largest clam can grow up to one metre long, and weigh over 300 kilogrammes.

Since the mid-19th century, giant clams have been exploited, particularly for food and the curio trade. In the last century, habitat loss, reef degradation, and overfishing for food and shell craft contributed to their depletion. Concerns over the dwindling populations of giant clams, and their threatened status throughout the Indo-Pacific fuelled scientific interest to examine their global distribution and develop measures to conserve them.

In 2014, marine biologists Dr Neo and Assoc Prof Todd embarked on an in-depth study on the 12 currently recognised species of giant clams. They examined online data and publications that date back to the 1900s on the taxonomy of giant clams and their global distribution. They collated the information available on the exploitation of giant clams and the laws that protect them, reviewed the impacts that harvesting rates may have on wild populations, and summarised the outcomes of past and ongoing conservation programmes. They also recruited fellow marine scientists from around the world to assess and cross-examined the information.

The world's largest giant clam at highest risk of extinction

Results from the three-year study showed that a combination of increased commercial demand, coupled with advances in fishing techniques, as well as climate change, pollution, habitat loss and coastal development have all impacted giant clams.

The highest threat of extinction is faced by the only truly gigantic giant clam species, Tridacna gigas, according to findings by the research team. The large size of Tridacna gigas results in the most substantial meat mass for consumption, and the species is easy to be harvested directly from the reef bed. Out of the 31 sites around the world where natural wild populations of Tridacna gigas were known to be present, the species are either severely depleted or could no longer be found at 26 of them. In Singapore, while old records dating back to 1847 mention Tridacna gigas in local waters, there have not been any sighting of it in recent times.

On the other hand, the smallest giant clam species, Tridacna crocea, that measures up to 15 centimetres, is the least threatened, thanks to its small size and burrowing behaviour, which makes it difficult for fishers to remove it from the reef bed where it lives.

Dr Neo, who is from the Department of Biological Sciences at NUS Faculty of Science, said, "We urgently need to step up on our conservation efforts to prevent the larger giant clam species from going extinct. The trends are worrying, so while there may be more of the smaller clam species now, it is only a matter of time before they become endangered too." Dr Neo is also from the St. John's Island National Marine Laboratory and the Tropical Marine Science Institute.

To assist in the conservation of Tridacna gigas, the Marine Science Institute at the University of the Philippines has been culturing giant clam species for the restoration of depleted populations in the Philippines for the last 20 years. The highlight of this programme is the recent appearance of young Tridacna gigas near the area where the parent clams are placed.

Assoc Prof Todd, who is also from the Department of Biological Sciences at the NUS Faculty of Science, commented, "The success by the Philippines team provides evidence that, given enough time and local protection, restocked clams can produce local juvenile recruitment. We hope to have similar success while restocking the fluted giant clam, Tridacna squamosa, in Singapore. While this species is not as threatened as Tridacna gigas, its numbers in Singapore are very low and the population is probably not currently self-sustaining."

The restocking project, started in 2011 by Assoc Prof Todd and Dr Neo, aims to increase the numbers of Tridacna squamosa on Singapore coral reefs. Over the past seven years, with funding support from the National Parks Board of Singapore, and the establishment of a fully functional hatchery with microalgal culture facilities and settlement tanks, there has been considerable progress in restocking Tridacna squamosa.

In 2014, NUS researchers reported the successful spawning of some 7,000 healthy fluted giant clam juveniles, and they are being grown in rearing tanks until they mature. In 2016, the team transplanted about 250 hand-reared Tridacna squamosa onto various reefs among the Southern Islands. Researchers continue to monitor these giant clams to assess their growth and survivorship.

"I hope that by highlighting the threat that giant clams face, and demonstrating the success of current conservation measures, we can encourage further restocking efforts and provide a greater push for their conservation," Dr Neo added. 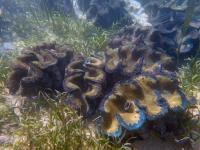