The oldest and longest record of nematodes revived after dried storage was for 39 years, which was reported in 1946. Another record reported on the revival and subsequent reproduction of nematodes from moss after having been frozen for 25 years. In regard to tardigrades, the previous longest records of revival after the long-term storage were 9 years for eggs in dried storage at room temperature and 8 years for animals in dried storage under a frozen condition. These animals have the ability to temporarily shut down their metabolic activities induced by certain physiological stimuli including desiccation and freezing, which is called "cryptobiosis."

In previous studies on the long-term survival of cryptobiotic microscopic animals, survival has been the primary observation, whereas the recovery of animals or subsequent reproduction (i.e. indicating long-term viability) has generally not been reported. Thus, the recovery conditions and reproduction following the revival of tardigrades, collected from an Antarctic moss sample frozen for over 30 years, were documented to develop further understanding of the mechanisms underlying the long-term survival of these organisms in cryptobiosis.

The approximately 0.2 mm long tardigrades were retrieved from a frozen moss sample collected in Antarctica in November 1983. In May 2014, the moss was defrosted (at 3 °C for 24 h) and soaked in water (for an additional 24 h). Two individuals and one egg were collected from the sample and reared on agar plates with algae provided as food. One of the revived tardigrades and the juvenile that hatched from the revived egg went on to continuous reproduction successfully.

Possible damage accumulated over 30 years of cryptobiosis was indicated by the long recovery time required for the animals and the longer time required for the first egg laid after the revival to hatch. On the other hand, no obvious damage was observed in the animal that hatched from the revived egg. "Our team now aims at unraveling the mechanisms underlying the long-term survival of cryptobiotic organisms by studying damage to tardigrades' DNA and their ability to repair it." said Megumu Tsujimto, the lead researcher at National Institute of Polar Research. 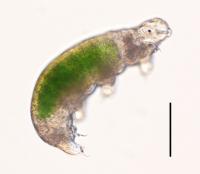