Astrophysicists have come a step closer to understanding the origin of a faint glow of gamma rays covering the night sky. They found that this light is brighter in regions that contain a lot of matter and dimmer where matter is sparser - a correlation that could help them narrow down the properties of exotic astrophysical objects and invisible dark matter.

The glow, known as unresolved gamma-ray background, stems from sources that are so faint and far away that researchers can't identify them individually. Yet, the fact that the locations where these gamma rays originate match up with where mass is found in the distant universe could be a key puzzle piece in identifying those sources.

"The background is the sum of a lot of things 'out there' that produce gamma rays. Having been able to measure for the first time its correlation with gravitational lensing - tiny distortions of images of far galaxies produced by the distribution of matter - helps us disentangle them," said Simone Ammazzalorso from the University of Turin and the National Institute for Nuclear Physics (INFN) in Italy, who co-led the analysis.

The study used one year of data from the Dark Energy Survey (DES), which takes optical images of the sky, and nine years of data from the Fermi Gamma-ray Space Telescope, which observes cosmic gamma rays while it orbits the Earth.

"What's really intriguing is that the correlation we measured doesn't completely match our expectations," said Panofsky fellow Daniel Gruen from the Kavli Institute for Particle Astrophysics and Cosmology (KIPAC) at the Department of Energy's SLAC National Accelerator Laboratory and Stanford University, who led the analysis for the DES collaboration. "This could mean that we either need to adjust our existing models for objects that emit gamma rays, or it could hint at other sources, such as dark matter."

The study was accepted today for publication in Physical Review Letters.

Two sensitive 'eyes' on the sky

Gamma radiation, the most energetic form of light, is produced in a wide range of cosmic phenomena - often extremely violent ones, such as exploding stars, dense neutron stars rotating at high speeds and powerful beams of particles shooting out of active galaxies whose central supermassive black holes gobble up matter.

Another potential source is invisible dark matter, which is believed to make up 85 percent of all matter in the universe. It could produce gamma rays when dark matter particles meet and destroy each other in space.

The Large Area Telescope (LAT) onboard the Fermi spacecraft is a highly sensitive "eye" for gamma radiation, and its data provide a detailed map of gamma-ray sources in the sky.

But when scientists subtract all the sources they already know, their map is far from empty; it still contains a gamma-ray background whose brightness varies from region to region.

"Unfortunately gamma rays don't have a label that would tell us where they came from," Gruen said. "That's why we need additional information to unravel their origin."

That's where DES comes in. With its 570-megapixel Dark Energy Camera, mounted on the Victor M. Blanco 4-meter Telescope at the Cerro Tololo Inter-American Observatory in Chile, it snaps images of hundreds of millions of galaxies. Their exact shapes tell researchers how the gravitational pull of matter bends light in the universe - an effect that shows itself as tiny distortions in galaxy images, known as weak gravitational lensing. Based on these data, the DES researchers create the most detailed maps yet of matter in the cosmos.

"The result itself is not surprising. We expect that there are more gamma ray producing processes in regions that contain more matter, and we've been predicting this correlation for a while," said Nicolao Fornengo, one of Ammazzalorso's supervisors in Turin. "But now we've succeeded in actually detecting this correlation for the first time, and we can use it to understand what causes the gamma ray background."

One of the most likely sources for the gamma-ray glow is very distant blazars - active galaxies with supermassive black holes at their centers. As the black holes swallow surrounding matter, they spew high-speed jets of plasma and gamma rays that, if the jets point at us, are detected by the Fermi spacecraft.

Blazars would be the simplest assumption, but the new data suggest that a simple population of blazars might not be enough to explain the observed correlation between gamma rays and mass distribution, the researchers said.

"In fact, our models for emissions from blazars can fairly well explain the low-energy part of the correlation, but we see deviations for high-energy gamma rays," Gruen said. "This can mean several things: It could indicate that we need to improve our models for blazars or that the gamma rays could come from other sources."

One of these other sources could be dark matter. A leading theory predicts the mysterious stuff is made of weakly interacting massive particles, or WIMPs, which could annihilate each other in a flash of gamma rays when they collide. Gamma rays from certain matter-rich cosmic regions could therefore stem from these particle interactions.

The idea to look for gamma-ray signatures of annihilating WIMPs is not a new one. Over the past years, scientists have searched for them in various locations believed to contain a lot of dark matter, including the center of the Milky Way and the Milky Way's companion galaxies. However, these searches haven't produced identifiable dark matter signals yet. The new results could be used for additional searches that test the WIMP hypothesis.

Although the probability that the measured correlation is just a random effect is only about one in a thousand, the researchers need more data for a conclusive analysis.

"These results, connecting for the first time our maps of gamma rays and matter, are very interesting and have a lot of potential, but at the moment the connection is still relatively weak, and one has to interpret the data carefully," said KIPAC Director Risa Wechsler, who was not involved in the study.

One of the main limitations of the current analysis is the amount of available lensing data, Gruen said. "With data from 40 million galaxies, DES has already pushed this to a new level, and that's why we were able to do the analysis in the first place. But we need even better measurements," he said.

With its next data release, DES will provide lensing data for 100 million galaxies, and the future Large Synoptic Survey Telescope (LSST) will look at billions of galaxies in a much larger region of the sky.

"Our study demonstrates with actual data that we can use the correlation between the distributions of matter and gamma rays to learn more about what causes the gamma-ray background," Fornengo said. "With more DES data, LSST coming online and other projects like the Euclid space telescope on the horizon, we'll be able to go much deeper in our understanding of the potential sources."

Then, the scientists might be able to tell if some of that gamma-ray glow stems from dark matter's self-destruction.

DES is an international project with over 400 scientists from 25 institutions in 7 countries, who have come together to carry out the survey. Parts of the project were funded by DOE's Office of Science and the National Science Foundation. NASA's Fermi Gamma-ray Space Telescope is an international and multi-agency space observatory. The analysis used Fermi-LAT data that were publicly released by the international LAT collaboration. 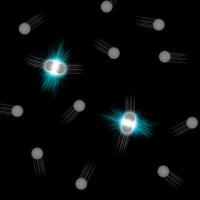