Individual molecules have been used to create electrical components like resistors, transistors and diodes, that mimic the properties of familiar semiconductors. But according to Nongjian (NJ) Tao, a researcher at the Biodesign Institute® at Arizona State University, unique properties inherent in single molecules may also allow clever designers to produce novel devices whose behavior falls outside the performance observed in conventional electronics.

In research appearing in today's issue of Nature Nanotechnology, Tao describes a method for mechanically controlling the geometry of a single molecule, situated in a junction between a pair of gold electrodes that form a simple circuit. The manipulations produced over tenfold increase in conductivity.

The unusual, often non-intuitive characteristics of single molecules may eventually be introduced into a broad range of microelectronics, suitable for applications including biological and chemical sensing; electronic and mechanical devices.

Delicate molecular manipulations requiring patience and finesse are routine for Tao, whose research at Biodesign's Center for Bioelectronics and Biosensors has included work on molecular diodes, graphene behavior and molecular imaging techniques. Nevertheless, he was surprised at the outcome described in the current paper: "If you have a molecule attached to electrodes, it can stretch like a rubber band," he says. "If it gets longer, most people tend to think that the conductivity will decrease. A longer wire is less conductive than a shorter wire."

Indeed, diminishing conductivity through a molecule is commonly observed when the distance between the electrodes attached to its surface is increased and the molecule becomes elongated. But according to Tao, if you stretch the molecule enough, something unexpected happens: the conductance goes up—by a huge amount. "We see at least 10 times greater conductivity, simply by pulling the molecule."

As Tao explains, the intriguing result is a byproduct of the laws of quantum mechanics, which dictate the behavior of matter at the tiniest scales: "The conductivity of a single molecule is not simply inversely proportional to length. It depends on the energy level alignment."

In the metal leads of the electrodes, electrons can move about freely but when they come to an interface—in this case, a molecule that sits in the junction between electrodes—they have to overcome an energy barrier. The height of this energy barrier is critical to how readily electrons can pass through the molecule. By applying a mechanical force to the molecule, the barrier is lowered, improving conductance.

"Theoretically, people have thought of this as a possibility, but this is a demonstration that it really happens," Tao says. "If you stretch the molecule and geometrically increase the length, it energetically lowers the barrier so electrons can easily go through. If you think in optical terms, it becomes more transparent to electrons."

The reason for this has to do with a property known as force-induced resonant tunneling. This occurs when the molecular energy moves closer to the Fermi level of the electrodes—that is, toward the region of optimal conductance. (See figure 1) Thus, as the molecule is stretched, it causes a decrease in the tunneling energy barrier.

For the experiments, Tao's group used 1,4'-Benzenedithiol, the most widely studied entity for molecular electronics. Further experiments demonstrated that the transport of electrons through the molecule underwent a corresponding decrease as the distance between the electrodes was reduced, causing the molecule's geometry to shift from a stretched condition to a relaxed or squeezed state. "We have to do this thousands of times to be sure the effect is robust and reproducible."

In addition to the discovery's practical importance, the new data show close agreement with theoretical models of molecular conductance, which had often been at variance with experimental values, by orders of magnitude.

Tao stresses that single molecules are compelling candidates for a new types of electronic devices, precisely because they can exhibit very different properties from those observed in conventional semiconductors.

Microelectromechanical systems or MEMS are just one domain where the versatile properties of single molecules are likely to make their mark. These diminutive creations represent a $40 billion a year industry and include such innovations as optical switches, gyroscopes for cars, lab-on-chip biomedical applications and microelectronics for mobile devices.

"In the future, when people design devices using molecules, they will have a new toolbox they can use."

In addition to Tao's position as director of Biodesign's Center for Bioelectronics and Biosensors, he holds a professorship in the Ira A. Fulton Schools of Engineering, School of Electrical, Computer and Energy Engineering. 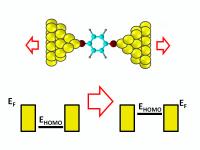