Shea yields are likely to benefit from a diversity of trees and shrubs in parkland habitats in West Africa, according to a new study led by scientists from Trinity College Dublin. The findings have important implications for managing a crop that is typically harvested and sold by women in rural areas, and which helps finance education for children.

Shea trees (Vitellaria paradoxa) grow in dryland savanna, forest and parkland ecosystems across an estimated 1 million km2 between western Senegal and north-western Uganda. Shea is an important agroforestry crop providing fruit near the end of the dry season; the nuts are processed into a nutritious butter that helps sustain an estimated 80 million people, as well as providing an income from local and global trade.

Shea trees benefit from bees moving pollen between their flowers to produce fruit, but the new study - just published in the Journal of Applied Ecology - found that in sites with low tree and shrub diversity, fruit production was severely limited by a lack of pollination. In higher-diversity sites, more honeybees were observed, and other bees visited flowers in greater numbers, boosting pollination services.

The shea parklands are a long-established traditional food and fuel wood production system, but with growing population pressure and the introduction of the tractor, management has moved away from a shifting cultivation and pastoralist system to more intensive 'permanent' agriculture. This has resulted in a loss of fallow land and contributed to a degraded and fragmented landscape with a lower diversity of plants, which makes life hard for insect pollinators in the Sahel.

The study recommends that when areas are cleared for cultivation, shrubs and trees that are beneficial to the local pollinators should be retained. Furthermore, measures to conserve pollinators in the region should target both honeybees and other bee species.

The researchers involved in this new study - funded by a Darwin Initiative grant - came together from Trinity and INGOs, BirdLife International and the RSPB, and conducted the work with local farmers, NGOs and academics in Burkina Faso, West Africa. The findings will be used to inform local conservation.

Jane Stout, Professor in Botany at Trinity, and a senior author of the study, said:

"In the face of a global biodiversity crisis, studies like this are crucial for demonstrating the everyday importance of biodiversity. We have shown that more biodiverse parklands support more pollinators, and this makes crops more productive - benefitting local peoples' livelihoods and well-being."

"Shea plays a special economic role in Burkina Faso. It is generally harvested and sold by women in rural areas and generates an income that is particularly linked to funding children's education, bringing wider societal benefits. The fruits ripen at a time of year when both food and money are scarcest, helping to tide families over.

"Nutritionally, shea provides essential nutrients and fats that are in short supply during the dry season, and safe-guarding the shea crop in the long-term is important for food security. Supporting pollinators and diverse plant communities in shea parklands also has secondary benefits as the majority of the trees and shrubs there benefit from pollination, including other fruit crops and species that are important for maintaining soil fertility."

Already, BirdLife International and the Burkinabe partner Naturama are working to change the way shea resources are managed within the landscape and are promoting a farmer-led approach built on simple, low cost changes in land management to enhance biodiversity on-farm. This includes natural regeneration and planting of native trees and shrubs with multiple benefits for people, livestock, insects and birds; replacing agrochemicals with locally produced mulch and compost; and introducing apiculture for pollination and food / income.

Together, the international team has produced biodiversity guidelines for Parkland Management that were adopted by the Global Shea Alliance, a 500-strong member organisation, which aims to increase sustainability across the shea value chain, both in the food and cosmetic industries. And, together with local partners, the team has been educating and increasing awareness around the important role of pollinators and undertaking training and capacity building with Burkinabe communities and in schools throughout the region.

Elaine Marshall, project manager, said: "Our work supports the theory that when we improve plant diversity on farms we see an increase in pollinators and shea yield. We believe a landscape approach which protects these ecosystem goods and services also reduces the vulnerability of human populations across the shea belt. This work demonstrates the potential for ecosystem restoration to deliver healthier and more resilient stocks of natural capital, enhanced pollination services and improved capacity for adapting to the impacts of climate change. Restoring 'nature' should be considered as a core component of successful development aid strategy."

Professor Juliet Vickery, RSPB's Centre for Conservation Science, said: "Retaining shrubs and trees can have multiple other benefits. It can help combat desertification in an area extremely vulnerable to the impact of climate change and provide vital habitat for many of Europe's summer migrant birds that winter or stop over in the Shea zone on their way to and from sub-Saharan Africa." 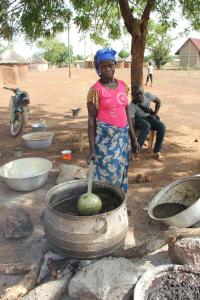