This new finding may pave the way for fabricating a new class of self-driven devices and materials, such as the ability to control the rhythmic movement of soft robots without relying on electronic circuits, and for the study of microbial physiology. It has been published in the scientific journal Nature.

A fast growing and interdisciplinary field, active matter science studies systems consist of units where energy is spent locally to generate mechanical work. Active matter includes all living organisms from cells to animals, biopolymers driven by molecular motors, and synthetic self-propelled materials. Self-organisation (the process of producing ordered structures via interaction between individual units) principles learned from these systems may find applications in tissue engineering and in fabricating new bio-inspired devices or materials.

The study was conceived by Professor Wu and his former PhD student Song Liu (currently a postdoctoral fellow at the Institute for Basic Science in Korea). They have a long term interest in understanding the physic phenomena of self-organisation in biological active matter, with a focus on active fluids consisting of motile microorganisms. In a previous paper co-worked with overseas physicists published in Nature in 2017, they reported a weak synchronization mechanism for biological collective oscillation, in which robust temporal order emerges from a large number of erratic but weakly coupled trajectories of individual cells in bacterial suspensions. However, the simultaneous control of spatial and temporal order is more challenging.

In the new study, the CUHK research team found clues in viscoelasticity, a common property of complex fluids which have both fluid-like and solid-like responses under deformation. While manipulating the viscoelasticity of a bacterial active fluid with DNA polymers, the team found spectacular phenomena. The bacterial active fluid first self-organises in space into a millimeter-scale rotating vortex, then displays temporal organisation as the giant vortex switches its global chirality periodically with tunable frequency, like a self-driven torsional pendulum. The team believed that these striking phenomena may possibly arise from the interplay between active forcing and viscoelastic stress relaxation. Viscoelastic relaxation occurs on a time scale corresponding to the transition from solid-like to fluid-like responses when a complex fluid is deformed.

To further understand the observed phenomena, the CUHK researchers teamed up with theoretical physicists Cristina Marchetti, Professor of the University of California, Santa Barbara and her former PhD student Suraj Shankar, now a Junior Fellow of Harvard University. The two theorists developed an active matter model that couples bacterial activity, polymer elastic stress, and the fields of bacterial velocity and polarisation. Analysis and computer simulations of the model reproduce all the major experimental findings, and also explain the onset of spatial and temporal order in terms of the competition between the time scales of viscoelastic relaxation and active forcing.

These new findings demonstrate experimentally for the first time that viscoelasticity of materials can be harnessed to control active matter's self-organisation. It will fuel the development of non-equilibrium physics and may pave the way for fabricating a new class of adaptive self-driven devices and materials. For instance, when coupled to actuation systems of soft robots, the millimeter-scale tunable and self-oscillating vortex may be used as a "clock generator" which provides timing signals for programmed microfluidic pumping and for controlling the rhythmic movement of soft robots, without relying on electronic circuits. Moreover, bacteria in biofilms and animal gastrointestinal tracts often swim in viscoelastic fluids abundant in long-chain polymers. The new findings also suggest that the viscoelasticity of the environment may modify the collective motion patterns of bacteria, thereby influencing the dispersal of biofilms and the translocation of gut microbiome.

The CUHK research team involved in the study was supported by the Research Grants Council of Hong Kong, the National Natural Science Foundation of China, and the CUHK Research Committee. The full text of the research paper can be found: https://www.nature.com/articles/s41586-020-03168-6.

The Chinese University of Hong Kong 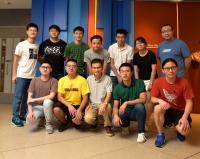