AUSTIN, Texas—Although most scientists believe tuberculosis emerged only several thousand years ago, new research from The University of Texas at Austin reveals the most ancient evidence of the disease has been found in a 500,000-year-old human fossil from Turkey.

The discovery of the new specimen of the human species, Homo erectus, suggests support for the theory that dark-skinned people who migrate northward from low, tropical latitudes produce less vitamin D, which can adversely affect the immune system as well as the skeleton.

John Kappelman, professor of anthropology at The University of Texas at Austin, is part of an international team of researchers from the United States, Turkey and Germany who have published their findings in the Dec. 7 issue of the American Journal of Physical Anthropology. The Leakey Foundation and the Scientific and Technical Research Council of Turkey funded the research.

Prior to this discovery in western Turkey, which helps scientists fill a temporal and geographical gap in human evolution, the oldest evidence of tuberculosis in humans was found in mummies from Egypt and Peru that date to several thousand years ago.

Paleontologists spent decades prospecting in Turkey for remains of Homo erectus, widely believed to be the first human species to migrate out of Africa. After moving north, the species had to adapt to increasingly seasonal climates.

The researchers identified this specimen of Homo erectus as a young male based on aspects of the cranial suture closure, sinus formation and the size of the ridges of the brow. They also found a series of small lesions etched into the bone of the cranium whose shape and location are characteristic of the Leptomeningitis tuberculosa, a form of tuberculosis that attacks the meninges of the brain.

After reviewing the medical literature on the disease that has reemerged as a global killer, the researchers found that some groups of people demonstrate a higher than average rate of infection, including Gujarati Indians who live in London, and Senegalese conscripts who served with the French army during World War I.

The research team identified two shared characteristics in the communities: a path of migration from low, tropical latitudes to northern temperate regions and darker skin color.

People with dark skin produce less vitamin D because the skin pigment melanin blocks ultraviolet light. And, when they live in areas with lower ultraviolet radiation such as Europe, their immune systems can be compromised.

It is likely that Homo erectus had dark skin because it evolved in the tropics, Kappelman explained. After the species moved north, it had to adapt to more seasonal climates. The researchers hypothesize the young male’s body produced less vitamin D and this deficiency weakened his immune system, opening the door to tuberculosis.

“Skin color represents one of biology’s most elegant adaptations,” Kappelman said. “The production of vitamin D in the skin serves as one of the body’s first lines of defenses against a whole host of infections and diseases. Vitamin D deficiencies are implicated in hypertension, multiple sclerosis, cardiovascular disease and cancer.”

Before antibiotics were invented, doctors typically treated tuberculosis by sending patients to sanatoria where they were prescribed plenty of sunshine and fresh air.

“No one knew why sunshine was integral to the treatment, but it worked,” Kappelman said. “Recent research suggests the flush of ultraviolet radiation jump-started the patients’ immune systems by increasing the production of vitamin D, which helped to cure the disease.” 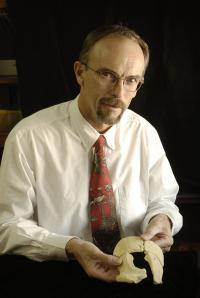