Heightened activity in the brain, caused by stressful events, is linked to the risk of developing a rare and sometimes fatal heart condition, according to research published today (Friday) in the European Heart Journal [1].

The study found the greater the activity in nerve cells in the amygdala region of the brain, the sooner the condition known as Takotsubo syndrome (TTS) can develop. The researchers suggest that interventions to lower this stress-related brain activity could help to reduce the risk of developing TTS; these could include drug treatments or techniques for lowering stress.

TTS, also known as "broken heart" syndrome, is characterised by a sudden temporary weakening of the heart muscles that causes the left ventricle of the heart to balloon out at the bottom while the neck remains narrow, creating a shape resembling a Japanese octopus trap, from which it gets its name. Since this relatively rare condition was first described in 1990, evidence has suggested that it is typically triggered by episodes of severe emotional distress, such as grief, anger or fear, or reactions to happy or joyful events. Patients develop chest pains and breathlessness, and it can lead to heart attacks and death. TTS is more common in women with only 10% of cases occurring in men. [2]

The amygdala is the part of the brain that controls emotions, motivation, learning and memory. It is also involved in the control of the autonomic nervous system and regulating heart function.

"The study suggests that the increased stress-associated neurobiological activity in the amygdala, which is present years before TTS occurs, may play an important role in its development and may predict the timing of the syndrome. It may prime an individual for a heightened acute stress response that culminates in TTS," said Dr Ahmed Tawakol, co-director of the Cardiovascular Imaging Research Center at Massachusetts General Hospital and Harvard Medical School (Boston, USA), who led the study.

"We also identified a significant relationship between stress-associated brain activity and bone marrow activity in these individuals. Together, the findings provide insights into a potential mechanism that may contribute to the 'heart-brain connection'."

In the first study to look at brain scans using F-fluorodeoxyglucose positron emission tomography/computed tomography (PET-CT) to assess brain activity before TTS develops, Dr Tawakol and colleagues analysed data on 104 people with an average age of 68 years, 72% of whom were women.

The patients had undergone scans at Massachusetts General Hospital (Boston, USA) between 2005 and 2019. Most of them had the scans to see if they had cancer and the scans also assessed the activity of blood cells in bone marrow. The researchers matched 41 people who went on to develop TTS between six months and five years after the scan with 63 who did not. The interval between the scan, the onset of TTs, last follow-up or death was an average (median) of 2.5 years for the 104 patients.

Dr Tawakol said: "Areas of the brain that have higher metabolic activity tend to be in greater use. Hence, higher activity in the stress-associated tissues of the brain suggests that the individual has a more active response to stress. Similarly, higher activity in the bone marrow reflects greater bone marrow metabolism. The PET/CT scans produce images that reflect the distribution of glucose metabolism. The brain images thereby yield a map of brain metabolic activity: the higher the values, the greater the activity in those brain regions."

The researchers found that people who went on to develop TTS had higher stress-related amygdalar activity on initial scanning (measured as a ratio of amygdalar activity to activity of brain regions that counter stress) compared to individuals who did not subsequently develop TTS. Further, the higher the amygdalar signal, the greater the risk of developing TTS. Among the 41 patients who developed TTS, the average interval between the scan and TTS was 0.9 months, whereas among the control group of 63 patients, the average interval between the scan and last follow-up or death was 2.9 years.

He said future studies should investigate whether reducing stress-related brain activity could decrease the chances of TTS recurring among patients who have experienced TTS previously.

"These findings add to evidence of the adverse effect of stress-related biology on the cardiovascular system. Findings such as these underscore the need for more study into the impact of stress reduction or drug interventions targeting these brain regions on heart health. In the meantime, when encountering a patient with high chronic stress, clinicians could reasonably consider the possibility that alleviation of stress might result in benefits to the cardiovascular system."

The process by which stress induces TTS is not well understood but may involve a multi-organ mechanism starting with activation of the stress-sensitive tissues of the brain. This brain activity in turn triggers several further events, including release of stress hormones, activation of the sympathetic nervous system and release of inflammatory cells, each of which can contribute to the development of TTS.

Limitations of the study include that it was a single-centre, retrospective study that consisted mainly of patients with a diagnosis of cancer, a known TTS risk factor, which may limit the generalisability of the findings. The researchers were unable to measure instantaneous changes in brain activity in response to a stressful event that led to TTS and so cannot directly show a causal relationship. Nor were they able to measure changes in activity in other regions of the brain, which could also play a role.

An accompanying editorial by researchers not involved with this study has already been published [3]. 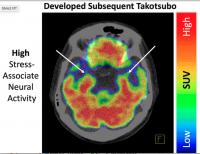 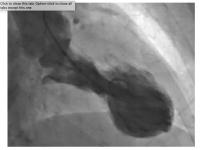