In a research paper just published in Phytobiomes, a fully open-access journal of The American Phytopathological Society, University of Florida researcher Ken Obasa and colleagues identified a novel and important biological aspect of R. solani while investigating brown patch infected cool-season turfgrasses. The intriguing observation was that R. solani isolated from diseased tissue were persistently associated with bacteria during growth on solid media. This led them to uncover the impact of a bacterium on brown patch disease.

The findings of this study suggest that at least some Rhizoctonia species in the anastomosis group 2-2IIIB can harbor intracellular bacteria that affect the biology of their fungal host and, in turn, the way the fungus interacts with plants. Ultimately, this research helps raise the prospects for developing alternative Rhizoctonia disease management strategies in plants.

This and similar recent discoveries raise important questions about the distribution and significance of fungal microbiomes to our understanding and management of phytopathogenic fungi.

"This research provides novel insights into fungal-bacterial symbioses, and sheds light on the complexity of within-microbiome interactions to enhance fungal virulence and plant disease," said Dr. Carolyn Young, Editor-in-Chief of Phytobiomes. "This research represents phytobiomes in action, fungal-bacterial interaction that enhance the virulence of a plant pathogen. We can now utilize this knowledge to identify better management strategies for the disease."

Visit http://www.phytobiomesjournal.org to learn more about the scope, intended readership, and other aspects of this groundbreaking new journal.

Phytobiomes is a fully open access, transdisciplinary journal of sustainable plant productivity, published by The American Phytopathological Society. Phytobiomes publishes original research about organisms and communities and their interaction with plants in any ecosystem. It also provides an international platform for fundamental, translational, and integrated research that accomplishes the overarching objective of offering a new vision for agriculture in which sustainable crop productivity is achieved through a systems-level understanding of the diverse interacting components of the phytobiome. These components include plant pathogens, insects, soil, microbes, weeds, biochemistry, climate, and many others. Follow us on Twitter @PhytobiomesJ 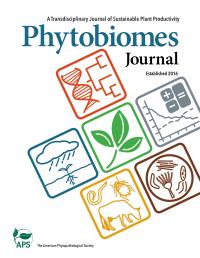