Bubbles gushing from melting glaciers and their icebergs make fjords the noisiest places in the oceans, a new study of waters near Alaska and Antarctica shows.

The underwater noise is much louder than previously thought, researchers found. That led them to ask how the noise affects the behavior of harbor seals and whales in Alaska's fjords.

"The ocean ambient sound gives us clues to the physical processes going on, but it also is an important aspect of the environment in which marine mammals and fish live. Like teenagers at a loud rock concert, the seals and whales modify their behavior depending on the ambient sound levels," said Erin Pettit, a glaciologist from the University of Alaska Fairbanks Department of Geosciences.

The team used underwater microphones to hear and record the average noise levels in three bays where glaciers flow into ocean fjords -- Icy Bay, Alaska; Yakutat Bay, Alaska; and Andvord Bay, Antarctica. All of the fjords have many icebergs from glacial calving.

The researchers found that the average underwater noise level from bubbles in these fjords exceeded ocean noise levels generated by all other sources, including weather, the movement and communication of fish, and machines such as ships and sonar devices. The team measured sound waves at frequencies between 300 and 20,000 Hertz, which covers most of the average human's hearing range.

Glacial calving contributed some of the noise, but the loud sounds were short-lived. When looking at overall noise levels for a long period of time, Pettit said it was the consistent melting of ice from the glaciers and their icebergs that was the real noise generator. Air trapped within the glacier ice escapes rapidly as it melts into saltwater, forming bubbles in the water that pop as they pinch off from the ice.

Pettit said their findings raise questions about how the underwater noise in the fjords will affect animals as climate change increases the rate at which glaciers melt into the ocean and then stops the process altogether as the glaciers retreat onto land.

She said fjords with glaciers are foraging hotspots for seabirds and marine mammals as well as important breeding locations for harbor seals. Seals might use the underwater noise to help hide from killer whales, which listen to locate their prey, she said. As glaciers retreat onto land, the seals would lose the acoustic camouflage, which might explain why harbor seal populations are declining in fjords where glaciers have retreated onto land, she said.

She said further studies are needed to investigate the relationship between the underwater noise levels and the fjord ecosystem. The team will continue listening to glaciers to see if they can develop a method of predicting glacier melt based on the underwater sounds.

NOTE TO EDITORS: A movie of the bubbles in a lab setting and other multimedia content is available at the following links:

Bubbles in a lab video: http://www.explore-ice.gi.alaska.edu/bubble-movies/ 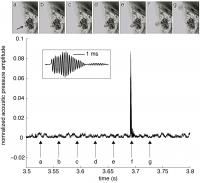 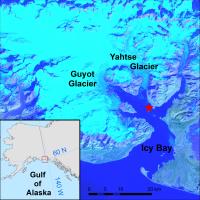