If a restaurant owner fails to pay the protection money demanded of him, he can expect his premises to be trashed. Warnings like these are seldom required, however, as fear of the consequences is enough to make restaurant owners pay up. Similarly, mafia-like behaviour is observed in parasitic birds, which lay their eggs in other birds' nests. If the host birds throw the cuckoo's egg out, the brood parasites take their revenge by destroying the entire nest. Consequently, it is beneficial for hosts to be capable of learning and to cooperate. Previously seen only in field observations, scientists at the Max Planck Institute for Evolutionary Biology in Plön have now modelled this behaviour mathematically to confirm it as an effective strategy.

Some parasitic birds, such as the North American brown-headed cowbird (Molothrus ater), are observed to punish host birds by destroying their clutches if their eggs are rejected. Consequently, the hosts accept a certain degree of parasitism as long as they can raise their own offspring alongside the parasitic chicks. "We tested and confirmed the mafia hypothesis, which was controversial among scientists," explains Maria Abou Chakra, lead author of the study. The parasitic birds use their behaviour to extort the hosts, forcing them to cooperate. "They give the hosts no choice. If they wish to avoid retaliation, they need to keep the foreign egg."

For the theory to work, two points are absolutely crucial: the host birds must be capable of learning, and the parasites must approach the same nests more than once. Only then does the mafia-like behaviour have the desired effect. "For the hosts, the best thing is to remove the foreign egg from their own nests. But if they encounter a retaliatory parasite that destroys their nest, it's best to adapt and accept the parasitic egg," says Abou Chakra.

Maria Abou Chakra works in the Evolutionary Theory Department at the Max Planck Institute for Evolutionary Biology. In collaboration with Christian Hilbe, now at Harvard University, and Arne Traulsen, she developed mathematical models to test the mafia hypothesis. The underlying principle in their minimalistic model was that each parasite lays no more than one egg in another bird's nest, which the host may accept or eject. A more complex model allowed the parasites to lay several eggs, each of which could be destroyed or accepted individually.

"Biologists prefer the complex model, because it is closer to reality. But we came to the same conclusion with both models: the dynamics of the interaction between host and parasite is cyclical." An equilibrium is never established; instead, there are regular cycles in terms of the frequency of mafia and non-mafia parasites and hosts that accept an egg immediately or only after they have suffered retaliation. If the number of non-mafia brood parasites is high, the advantage lies with conditional accepters, hosts that leave the parasite's egg in their nest only after their nest has been destroyed. After all, there is little chance the parasite is a retaliator. This behaviour therefore increases among host birds. And this, in turn, improves the survival rate of the mafia-like brood parasites. As soon as the latter are in the majority, it makes sense for the hosts to accept unconditionally, which, in turn, renders the mafia-like behaviour unnecessary. The cycle begins anew.

Evolutionary biologist Amotz Zahavi postulated the mafia hypothesis back in 1979. It has been contentious ever since. Critics argue that the retaliation gives the parasites no advantage, carrying high costs instead. However, the future nestlings benefit from the hot-headed behaviour if the host parents do indeed keep and hatch the next cuckoo's egg for fear of having their nest destroyed again.

Instead of retaliating, the parasites could attempt to mimic the eggs of the host birds. This makes it more difficult for hosts to identify and destroy the foreign egg. There are some birds which do in fact apply this strategy. But Abou Chakra sees an advantage in the mafia-like behaviour itself: "We believe it helps the parasites to avoid specialisation." Birds that do not adapt the size and colour of their eggs to any particular host can foist their offspring on nearly any species of bird and use their behaviour to force the foster parents to raise it. "The question is, what are the conditions under which it's better for parasites to specialise and when does mafia-like behaviour pay off?" This is what the scientists intend on testing next.

Fear of the cuckoo mafia 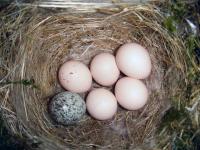 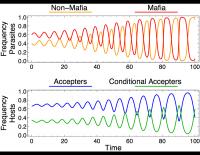