The icing on the cake for semiconductor nanocrystals that provide a non-damped optoelectronic effect may exist as a layer of tin that segregates near the surface.

One method of altering the electrical properties of a semiconductor is by introducing impurities called dopants. A team led by Delia Milliron, a chemist at Berkeley Lab's Molecular Foundry, a U.S Department of Energy (DOE) national nanoscience center, has demonstrated that equally important as the amount of dopant is how the dopant is distributed on the surface and throughout the material. This opens the door for engineering the distribution of the dopant in order to control what wavelength the material will absorb and more generally how light interacts with the nanocrystals.

"Doping in semiconductor nanocrystals is still an evolving art," says Milliron. "Only in the last few years have people begun to observe interesting optical properties as a result of introducing dopants to these materials, but how the dopants are distributed within the nanocrystals remains largely unknown. What sites they occupy and where they are situated throughout the material greatly influences optical properties."

Milliron's most recent claim to fame, a "smart window" technology that not only blocks natural infrared (IR) radiation while allowing the passage of visible light through transparent coated glass, but also allows for independent control over both kinds of radiation, relies on a doped semiconductor called indium tin oxide (ITO).

ITO, in which tin (the dopant) has replaced some of the indium ions in indium oxide (the semiconductor), has become the prototypical doped semiconductor nanocrystal material. It is used in all kinds of electronic devices, including touchscreens displays, smart windows and solar cells.

"The exciting thing about this class of materials is that the dopants are able to introduce free electrons that form at high density within the material, which makes them conducting and thus useful as transparent conductors," says Milliron

But the same electrons cause the materials to be plasmonic in the IR part of the spectrum. This means that light of IR wavelength can be resonant with free electrons in the material: the oscillating electric fields in the light resonate and can cause absorption.

"[These materials] can absorb IR light in a way that's tunable by adjusting the doping, while still being transparent to natural visible light. A tunable amount of absorption of IR light allows you to control heating. For us, that's the driving application," explains Milliron.

Until now, adjustments have been made by changing the amount of dopant in the semiconductor. Puzzled by studies in which optical properties did not behave as expected, Milliron and University of California (UC) Berkeley PhD candidate Sebastien Lounis looked to x-ray photoelectron spectroscopy to probe electrons near the surface of the ITO samples and investigate the distribution of elements within the samples at the Stanford Synchrotron Radiation Lightsource (SSRL).

The SSRL uses a tuneable beam of photons to excite electrons inside the material. If the electrons are close enough to the surface, they can sometimes be emitted and collected by a detector. These electrons provide information about the properties of the material, including the ratio of the amounts of different elements like indium and tin in ITO. Increasing the energy of the x-ray beam shows how the composition of tin and indium changes as one moves deeper into the sample. Ultimately, the spectroscopy technique allowed Milliron and her team to probe the doping distribution as a function of distance from the nanocrystals' surface.

Studies of two sets of samples allowed them to correlated tin distribution with optical properties, and showed that the shape and wavelength of plasmon absorption depended on tin distribution. The tin segregated on the surface showed reduced activation of dopants and symmetric plasmon resonances, with no damping caused by the dopants.

"When the tin sits near the surface, it interacts only weakly with the majority of the free electrons," explains Lounis. "This gives us the benefits of doping without some of drawbacks."

"Now that we know how to probe, we can go after targeted design features for particular applications," concludes Milliron. Deliberate placement of dopants by design provides a new tool for "dialing in plasmonic materials to do exactly what we want in terms of interaction with light."

A paper on this research has been accepted for publication in the Journal of the American Chemical Society (JACS) in April 2014. The paper is titled "The influence of dopant distribution on the plasmonic properties of indium tin oxide nanocrystals" with Lounis as the lead author and Milliron as the corresponding author. Other authors are Evan Runnerstorm, Amy Bergerud, and Dennis Nordlund.

This research was primarily supported by the DOE Office of Science. 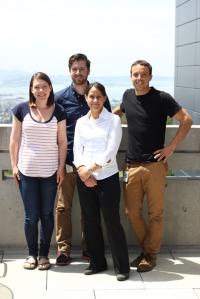