The plant genus Lepidiums is a small group of representatives of the economically important cabbage family Brassicaceae. Most commonly known as peppercress or peppergrass Lepidiums includes around 180 species worldwide. In a new extensive study, published in the open access journal PhytoKeys, scientists explore the diversity within the New Zealand Lepidiums oleraceum and allied species.

Lepidiums oleraceum, is known in New Zealand, as "Cook's Scurvy Grass" because Captain James Cook, and other early explorers of that island nation, ate the plant as a scurvy preventive. Early botanists long recognised that Lepidiums oleraceum was very variable but by the time they came to seriously study this variation, the species was already extinct throughout much of its former range, making critical morphological studies difficult, and to make matters worse, without recourse to modern taxonomic methods, because past botanists had tended to describe new species and varieties.

Thus, the PhytoKeys paper, is the result of 17 years careful study of the range of variation in L. oleraceum utilising extensive field work, cultivation and genetic studies, as well as critical study of the type material held throughout the world. The end result presents the first serious revision of the New Zealand L. oleraceum "comple"' offered since 1899. The paper not only describes 10 new species but offers insights into their ecology and conservation status.

Scientists from New Zealand, led by Dr. Peter de Lange, Science & Capability Group, provide a full revision of 16 species, six previously recognised by other botanists but, remarkably 10 are described as new. Their work finishes a revision of the New Zealand Lepidiums species, which, aside from the species they treat in their paper includes a further four species, two of which (L. kawarau and L. sisymbrioides) are internationally significant because they are the only dioecious members of the Brassicaceae (i.e. they have both male and female plants).

Within the Lepidiums oleraceum "complex" the scientists recognise a great diversity occurring not only in New Zealand but also on many of that nation's smaller surrounding islands and island groups. For example, the Kermadec Islands (which lie 1000 km north-east of New Zealand) support (as well as L. oleraceum) the newly described L. castellanum which is found there decorating the fortress like cliffs of the southern islands of the Kermadec group.

Lepidiums oleraceum, and many of these newly described species are believed to have once been abundant in New Zealand. All have declined as a consequence of habitat loss, loss of ecosystem functionality, through over-collection by botanists and as a consequence of the arrival of pests and diseases previously unknown in that country. The PhytoKeys paper reveals that there are now only scattered and fragmented populations left of all the species, which raises concerns about their conservation status. Indeed most of the 16 plants described in the study are already listed as "Threatened/Nationally Critical" by the New Zealand people.

The high extinction rate of these beautiful plants is exemplified by the newly described Lepidiums amissum. The epithet 'amissum' is derived from the Latin 'amissus' meaning 'lost' and is used here to refer to the loss though extinction, of this plant from the New Zealand flora. The description of the species was only made possible because of herbarium specimens collected between 1880 and 1817.

By global standards New Zealand is a hotspot for plant diversity with 83% of its estimated 2400 indigenous plants considered endemic. Of these plants, about one in 10 are believed to be threatened, and the numbers of threatened plants are rising. Currently though, New Zealand is lucky, just six of their endemic species are regarded as extinct. However, with the recognition of L. amissum that figure has now climbed to seven.

The PhytoKeys Lepidiums paper is seen by the authors as a critical first step toward saving New Zealand's Lepidiums diversity. The authors are now working on a further paper looking at genetic variation within all the species, as a further step toward deciding which populations should be managed to prevent further extinctions. 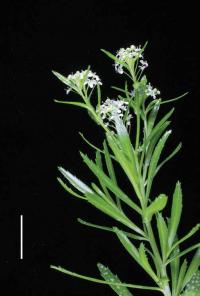