Physicists at Argonne National Laboratory have found that magnetic particles suspended in water and subjected to an alternating magnetic field will form snake-shaped structures that can control the flow of the surrounding fluid. Current incarnations of the magnetic snake are a few centimeters long, but the team envisions much smaller versions as pumps to manipulate liquids on microscopic scales or precursors for next-generation magnetic recording media in future computers. The team's recent experiment shows that the speed of the water flowing along the snake depends on how quickly the magnetic field alternates.

To make a magnetic snake, the team put a water-filled beaker at the center of a magnetic coil. In the water, they suspended magnetic nickel spheres a little smaller than one tenth of a millimeter in diameter. These particles reacted to an alternating magnetic field created by the coil. The nickel spheres aligned themselves head-to-tail with nearby particles as though they contained tiny bar magnets.

The movements of the particle chain made waves on the surface of the water, encouraging the formation of parallel chains and causing a segmented pattern. The self-assembly of the snakes can take anywhere from a fraction of a second to several minutes. -KM

A recent experiment conducted by physicists at University of Bristol in the United Kingdom has shown that liquid drops can defy gravity. Droplets of liquid on an inclined plate that is shaken up and down can travel uphill rather than sliding down. In fact, if the plate vibrates at the right rate, the droplets will always travel counter-intuitively up the incline.

The reason has to do with pushing and pulling. As the plate rises, it pushes the droplet upward, and as it falls, it pulls the droplet down. Inertia would have the droplet slide down as the plate moved upward. Similarly, the droplet would climb up the incline as the plate drops, resisting the rapid downward acceleration.

If the vibration doesn't apply enough force to the droplet, it will just sit still on the inclined plate. As the force increases, the droplet will begin to slide. Increasing the forces further, the droplet sits still again. Turn up the force on the droplet a little more, and it starts to climb.

Since the droplet must withstand a fair amount of force, alternately pushing and pulling, the fluid has to be somewhat thick or viscous. Pure water droplets will break apart before the forces are strong enough to cause them to climb. On the other end, the drops move very slowly if the fluid is too thick. Nevertheless, this method for moving droplets using vibrations may prove useful in the manipulation of microscopic fluids. -KM

Dragonflies adjust their wing motion while hovering to conserve energy, according to a Cornell University study of the insect's flight mechanics. The revelation contradicts previous speculation that the change in wing motion served to enhance vertical lift.

The Cornell physicists came to their conclusions after analyzing high speed images of dragonflies in action. The insects have two pairs of wings, which sometimes move up and down in harmony. At other times the front set of wings flap out of sync with the back set.

The physicists found that dragonflies maximized their lift, when accelerating or taking off from a perch, by flapping both sets of wings together. When they hover, however, the rear wings flap at the same rate as the front, but with a different phase (imagine two people clapping at the same speed, but with one person's clap delayed relative to the other).

The physicists' analysis of the out-of-sync motion showed that while it didn't help with lift, it minimized the amount of power they had to expend to stay airborne, allowing them to conserve energy while hovering in place. -JR 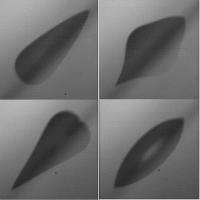