A pair of chemicals used by wallflowers and their kin to ward off predators have evolved to complement each other, with one targeting generalist herbivores and the other targeting specialised herbivores that have become resistant to the generalist defence.

Plants are engaged in an ongoing arms race with the creatures that eat them. They evolve defences to deter plant eaters, while their herbivores evolve counter-defences. The new study, published today in eLife, reveals details of the evolutionary chemical arms race in the wallflower genus Erysimum, a group of flowering plants in the mustard family Brassicaceae.

"Studying how these two defences evolved in this large genus can help scientists understand the trade-offs that the plants face as they try to defend themselves against multiple enemies," explains lead author Tobias Züst, PhD, Research Associate at the Institute of Plant Sciences, University of Bern, Switzerland.

To do this, Züst and his team sequenced the genome of the wormseed wallflower, a short-lived wild mustard. They next created a detailed family tree for this plant and 47 other wallflower species and compared the diversity and abundance of glucosinolates and cardenolides across these species. They found that the two defences varied independently of each other, and that closely related, geographically co-occurring species shared similar cardenolide traits, but not glucosinolate traits. This is likely a result of separate selective pressures acting on each defence.

"Even though most species co-expressed two different types of potentially costly chemical defences, there was no evidence of a trade-off between glucosinolates and cardenolides," Züst says. "Instead, these two types of chemicals appear to complement each other and do not serve redundant functions."

Züst adds that the emergence of cardenolides corresponds with an explosion in the number of wallflower species, which suggests this second complementary defence may have allowed these plants to succeed and diversify into new habitats.

"Further analysis of the wormseed wallflower genome will be needed to help scientists identify glucosinolate and cardenolide-producing genes in this species, as well as aid our understanding of the function of these chemicals in the evolution of Brassicaceae defences," concludes senior author Georg Jander, Professor at the Boyce Thompson Institute in Ithaca, New York, US.

The paper 'Independent evolution of ancestral and novel defenses in a genus of toxic plants (Erysimum, Brassicaceae)' can be freely accessed online at https://doi.org/10.7554/eLife.51712. Contents, including text, figures and data, are free to reuse under a CC BY 4.0 license.

eLife is a non-profit organisation inspired by research funders and led by scientists. Our mission is to help scientists accelerate discovery by operating a platform for research communication that encourages and recognises the most responsible behaviours in science. We publish important research in all areas of the life and biomedical sciences, including Evolutionary Biology and Plant Biology, which is selected and evaluated by working scientists and made freely available online without delay. eLife also invests in innovation through open-source tool development to accelerate research communication and discovery. Our work is guided by the communities we serve. eLife is supported by the Howard Hughes Medical Institute, the Max Planck Society, the Wellcome Trust and the Knut and Alice Wallenberg Foundation. Learn more at https://elifesciences.org/about.

About the University of Bern

Globally connected and regionally anchored, the University of Bern is focused on excellence in research and teaching. It was here that Albert Einstein qualified as a lecturer.

With roots in the 1500s, this comprehensive university is based in the heart of Switzerland's capital, Bern, near its UNESCO-listed medieval old town. Some 18,500 students from more than 125 nations benefit from a full range of disciplines at all levels, ranging from medicine to mathematics, economics to world literature, archaeology to law and more. http://www.unibe.ch.

Full list of funders and grant numbers for this research:

How wallflowers evolved a complementary pair of plant defenses 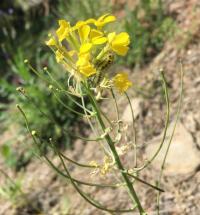