WASHINGTON, Aug. 16, 2009 — Attention all smokeless tobacco users! It's time to banish the comforting notion that snuff and chewing tobacco are safe because they don't burn and produce inhalable smoke like cigarettes. A study that looked beyond the well-researched tobacco hazards, nitrosamines and nicotine, has discovered a single pinch –– the amount in a portion –– of smokeless tobacco exposes the user to the same amount of another group of dangerous chemicals as the smoke of five cigarettes.

The research on polycyclic aromatic hydrocarbons (PAH) in smokeless tobacco was reported here today at the 238th National Meeting of the American Chemical Society (ACS). It adds to existing evidence that smokeless contains two dozen other carcinogens that cause oral and pancreatic cancers, the scientists say.

"This study once again clearly shows us that smokeless tobacco is not safe," said Irina Stepanov, Ph.D., who led the research team. "Our finding places snuff on the same list of major sources of exposure to polycyclic aromatic hydrocarbons as smoking cigarettes." PAHs are widespread environmental contaminants formed as a result of incomplete burning of wood, coal, fat in meat, and organic matter. PAHs form, for instance, during the grilling of burgers, steaks and other meat.

The findings come in the midst of a rise in both marketing and consumption of smokeless tobacco, which many consumers regard as less dangerous than other forms of tobacco. Estimates suggest that sales of moist snuff in the United States have doubled since the 1980s.

"The feeling of safety among some smokeless users is wrong," said Stepanov, a chemist with Masonic Cancer Center, University of Minnesota, Minneapolis. "A total of 28 carcinogens were identified in smokeless tobacco even before our study. Continued exposure to these over a period of time can lead to cancer. Now we have found even more carcinogens in snuff." In addition to the heightened cancer risk, she noted that chronic use of snuff leads to nicotine addiction, just as it does with cigarette smoking.

Stepanov said that until recently, scientists believed that only trace amounts of PAH existed in snuff because the tobacco was not burned when used. This assumption proved to be wrong. "Even though smokeless tobacco use does not involve burning, moist snuff is getting contaminated with PAH during its manufacturing," according to Stepanov. The most likely source of this contamination with PAH is the curing process that is used to turn tobacco leaves into snuff. This process is called 'fire-curing', and it puts tobacco into direct contact with the smoke generated by smoldering hardwoods –– a rich source of various PAHs.

Looking to the next project, she said the team is working on a study that will examine a wide range of smokeless tobacco brands to compare PAH levels among them.

Funding for Stepanov's research came from the National Cancer Institute and the National Institute on Drug Abuse to the Transdisciplinary Tobacco Use Research Center at the University of Minnesota. The research team working on this project includes Dr. Dorothy Hatsukami and Dr. Stephen Hecht, renowned experts in tobacco carcinogenesis and tobacco harm reduction. 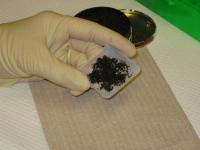