In order to prevent other birds from stealing the food they are storing for later, Eurasian jays, a type of corvid, minimizes any auditory hints a potential pilferer may use to steal their cache (food that is buried for later use). The new research was published today, 05 December, in the journal Proceedings of the Royal Society B.

Corvids are prolific cachers (or hoarders), burying food such as acorns in several thousand locations over the course of a year. When food becomes scarce during winter and spring, they remember where they buried their caches and retrieve the food items. However, pilfering of caches is commonplace. As a result, they are often trying to minimize other birds stealing their food and maximize the food that they steal.

In the first experiment, the researchers gave the jays options to hide food in substrates which varied in the amount of noise they made (a tray containing noisy gravel and a tray containing quiet sand). The birds' preferences for using these different substrates were tested when they were alone, when they had another bird that could see and hear them and when there was another bird that could hear but could not see them.

The researchers found that if a Eurasian jay is caching and hears but does not see another bird nearby it will hide its cache in the less noisy substrate (for this study, sand rather than gravel). This is presumably done to avoid drawing unwanted attention from potential thieves that might then try to view the location of the cache.

In the second experiment, the scientists measured how many times the subjects vocalised depending on whether they were watching another jay caching, another jay stealing caches that the subject had made themselves, another jay that was not caching or stealing, or an empty compartment that contained no jay.

They found that pilfering birds vocalise less when spying on another bird caching compared to when they are alone. The researchers believe that the jays are quieter in order to prevent their presence becoming known to the caching bird that might otherwise hide their cache elsewhere or stop hiding food.

Rachael Shaw, a PhD student at the University of Cambridge and co-author of the paper, said: "As humans, we understand that other people can hear what we are doing, but there is only limited evidence for this ability in other animals. Our study of Eurasian jays is the first to report that a member of the crow family will suppress acoustic information by vocalising less when spying on another individual that is caching."

1. The paper 'Careful cachers and prying pilferers: Eurasian jays (Garrulus glandarius) limit auditory information available to competitors'will be published in the 05 December 2012 edition of Proceedings of the Royal Society B.

2. The video and images can be downloaded from the following link. Please credit Rachael Shaw for the video and Kylie Millar for the photos. https://www.dropbox.com/sh/eh1u7pr74es4cnw/Nj4FSfHcUt 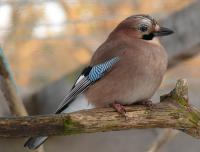