Australian researchers have found that so-called 'triple-negative breast cancers'1 are two distinct diseases that likely originate from different cell types. This helps explain why survival prospects for women with the diagnosis tend to be either very good or very bad.

The Sydney-based research team has found a gene that drives the aggressive disease, and hopes to find a way to 'switch it off'.

Stem cells have many of the same features as cancers. They are plastic and flexible, and have the ability to proliferate and spread into other tissues - deadly traits in cancers.

Previous studies have shown that breast stem cells are needed for breast growth and development during puberty and pregnancy, although how they evolve from stem cells into specialist cells has been unclear.

The new study has shown that a gene known as 'inhibitor of differentiation 4' (ID4) determines whether a stem cell remains a stem cell, or whether it differentiates into a specialist cell.

Drs Alex Swarbrick and Simon Junankar from Sydney's Garvan Institute of Medical Research spearheaded this large interdisciplinary study,2 which links the development of the mammary gland in mice with human breast cancer. Its main finding, that ID4 not only 'marks', but appears to control, the highly aggressive form of triple negative breast cancer is published online today in Nature Communications.

"We found that ID4 is produced at high levels in roughly half of all triple negative breast cancers, and that these cancers have a particularly poor prognosis," said project leader Dr Alex Swarbrick.

"We also showed that if you block the ID4 gene in experimental models of triple negative breast cancer, the tumour cells stop dividing."

It is interesting to note that blocking ID4 switches on the oestrogen receptor3 and several other genes expressed by the best-prognosis breast cancer.

"Oestrogen receptor-positive breast cancers have a relatively good prognosis because the drug Tamoxifen is very effective at blocking the oestrogen receptor and hence their growth" noted Swarbrick.

"We speculate, therefore, that by blocking ID4 it might be possible to turn stem-cell-like breast cancers into less aggressive breast cancers that may even respond to tamoxifen. If we are correct, that would be remarkable."

The next step for Dr Swarbrick and his team will be to study the biochemistry of ID4 in a cell - to determine how best to block it in people.

There are also plans to undertake therapeutic experiments in mice to test whether or not switching off ID4 sensitises a tumour to tamoxifen.

"We don't know yet whether we are seeing a real oestrogen-dependent cancer after ID4 is blocked - one with an effective oestrogen receptor - or just a caricature of one.

"We're very fortunate that our collaborator in Cambridge UK is a world expert on oestrogen receptor function.

"We also have technologies that allow us to study processes on a genome-wide scale - so we can map the interactions of ID4 comprehensively."

1. Triple-negative breast cancers, which make up around 15% of all breast cancers, lack any of the three receptors (oestrogen, progesterone or HER2) that would make them responsive to targeted drugs. Overall, patients have a higher risk of disease recurrence and shorter survival than those with other breast cancers.

2. A large multidisciplinary team including developmental biologists, cell biologists, pathologists, genetics experts and bioinformaticians collaborated on this paper. Dr Simon Junankar undertook all the developmental work, studying the physiology of the mouse and the formation of stem cells. Laura Baker did much of the functional work in breast cancer, showing that aggressive triple-negative breast cancers depend on ID4. Bioinformatician, Dr Dan Roden, analysed transcriptomic data and gene signatures.

3. Professor Jane Visader and colleagues, from the Division of Stem Cells and Cancer at the Walter and Eliza Hall Research Institute in Melbourne, recently published findings about the role of ID4 in the journal Development.

The switch that might tame the most aggressive of breast cancers 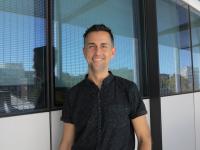