The Multiple User System for Earth Sensing Facility (MUSES) will inspire and enable numerous branches of research and science through its ability to support many different kinds of investigations and hardware aboard the International Space Station. Providing a platform for payloads such as high-resolution digital cameras and hyperspectral imagers, MUSES provides precision pointing and other accommodations for various kinds of research and science.

The space station's orbit cover's 90% of the Earth's inhabited surfaces and allows for both day and nighttime passes, allowing a variety of observation and data collection times.

MUSES will provide Earth imagery data to NASA's SERVIR team to provide disaster response information to aid in the team's humanitarian missions, improving environmental decision-making among developing nations. The MUSES payload data can be used in response to disasters world-wide.

Instruments flying aboard the platform will be able to detect phenomenon like flooding, coastal erosion, water pollution, red tide, and landslides. Space-based imagery is one of many tools used in the disaster response decision-making process.

The MUSES platform is a U.S. National Laboratory sponsored pointing system and can accommodate up to four instruments at a time. Each instrument can be installed and removed robotically. These payloads can be operated simultaneously, triggering a system that can communicate with all the systems aboard the space station and store and transmit large amounts of data back to the ground. The system will be operated from the Teledyne Operations Center in Huntsville, Alabama.

Developed in a cooperative agreement between Teledyne Brown Engineering and NASA, MUSES will provide many commercial companies the opportunity to conduct their science and research in space.

MUSES provides low-cost access to space for instrument developers. MUSES and the ability to return payloads from the space station to Earth provides an excellent platform for technology demonstration and the space qualification of hardware.

"Unlike the Earth views from ISS's internal viewing windows which are somewhat limited by surrounding structure, the view to the Earth from the ISS truss is essentially unobstructed," said Galloway

The first investigation to be hosted aboard the MUSES platform will be the DLR Earth Sensing Imaging Spectrometer (DESIS), on Expeditions 51/52 and 53/54, and is planned for launch later this year. DESIS is a hyperspectral imager operating in the 400-1000 nanometer spectral range. "The German Space Agency, DLR, will use the DESIS imagery for scientific purposes. Teledyne Brown Engineering will use the imagery for commercial purposes," according to Galloway.

"MUSES was designed to interface with every possible data network on ISS and take maximum utilization of the downlink capability from ISS to ground to achieve our goal of getting large amounts of image and scientific data down from these instruments," said Galloway.

For more information about the science happening aboard the orbiting laboratory, follow @ISS_Research. 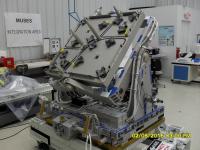