A study of spitting cobras, published in Science (22 January 2021 doi 10.1126/science.abb9303) reveals how a combination of venom components have evolved to create an instantly painful venom, not once, but on three separate occasions.

This is the first clear example of snake venom evolving for defence, and provides a remarkable example of convergent evolution, or how natural selection can cause the same solution to a problem to evolve multiple times.

Contrary to the theory that venoms are adapted primarily to enable snakes to kill prey, in spitting cobras, a venom which causes instant pain, and a delivery system which enables the snake to spray the venom to a distance of up to 2.5 metres towards the eyes of anything which comes too close, suggests a defence mechanism, rather than hunting weaponry.

"Here's a further strong piece of evidence to illustrate that similar evolutionary challenges often generate the same solutions. Even though we studied three different cobra groups, which evolved in different locations and at different evolutionary time periods, each evolved the same defensive mechanisms in the face of a threat.

All cobras have venom components that cause tissue destruction, called cytotoxins. But in spitting cobras, adding another group of toxins, phospholipases A2, has created a synergistic effect, resulting in an instantly painful venom, which can rapidly deter and even blind an aggressor.

Intriguingly, by working back through evolutionary lineages, the team also found that the changes occurred in the three different geographic locations around the same time that early humans appeared in the fossil record in those areas.

Dr Wüster adds: "Many primates attack snakes with sticks and stones. The arrival of bipedal hominins, with both hands free for mischief, may have been just the kind of selection pressure that favoured long-distance defence through spitting and a specially adapted defensive venom.

The idea that early humans, millions of years ago, may have caused the evolution of spitting in cobras emphasises how our origins were very much entwined with the wider ecosystems of Africa and Asia at the time"

Bangor University MSc students studying on the only zoology with herpetology course in the UK had the opportunity to contribute to this international research project. The students were responsible for generating DNA sequences to generate the phylogeny, or evolutionary family tree, of cobras, which allowed the study to trace the evolution of venom adaptations.

Anthony Plettenberg Laing, originally from Cambridge, and now based in Berlin, Germany is one of the authors. After his BSc in Zoology with Herpetology, he worked on this project for his MScRes and says:

"Bangor University has often been referred to as the Herpetological capital of the UK and was the only institute in the UK offering a specific Herpetology course. It has a team of world-renowned researchers who specialise in this field. I therefore knew that coming to Bangor would incubate my passion and help me grow and also thrive there, allowing me to get heavily involved in the field of herpetology."

"During my studies at Bangor I worked on various exciting projects with Dr Wolfgang Wüster and colleagues, including researching the iconic African and Asian cobras in the genus Naja. My work included sequencing a number of genes and creating phylogenetic trees to understand when and why different species had separated. To be an author in such a prestigious and impactful study in Science is an incredible honour and a true life-achievement."

She says: "The Zoology degree was ideal for me. I was able to learn so much in many different areas of research, gain a deeper understanding of biology and evolution generally and be actively involved in research to gain essential lab skills for my future. Without knowing at the time, my research there has contributed to bigger studies and has had a larger impact than I could have anticipated." 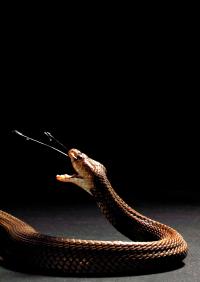