The parasites responsible for malaria seem to march to their own beat.

The mystery behind the molecular basis of how these parasites synch their rhythm in replication to the host's clock-driven rhythms has been solved. A new genetic analysis led by KAUST scientists revealed Plasmodium parasites have internal timekeeping systems that help the organism maintain essential oscillations in gene expression levels and cell cycle activities.

Just as humans reset their own biological clocks in response to light-dark cues, malaria parasites time their own rhythms to host signals to maximize their growth success.

The finding of a genetic metronome within the malaria parasite, as well as one component of this timekeeping mechanism, could open new pathways for combatting one of the world's deadliest contagious diseases. Saudi Arabia is on the verge of malaria eradication, but the disease continues to affect its southwestern border, where infections have proven difficult to treat and parasites are increasingly resistant to existing drugs.

"The knowledge from our study has the potential to inform new therapies for malaria elimination," says Amit Subudhi, a postdoctoral research fellow in Arnab Pain's group and the first author of the new report. "This information might allow doctors to formulate drug regimens in which patients take anti-malarial therapies with known target genes at particular times of the day so as to eliminate the malaria parasite more effectively."

Subudhi and Pain teamed up with colleagues from the University of Edinburgh, U.K., and from Nagasaki University, Japan, to profile gene activity patterns in mouse-infecting malaria parasites. They found that more than half of all the parasite's genes exhibited 24-hour cycles of activity, ramping up and down at regular daily intervals. This pattern is consistent with the characteristic rhythms of fevers and chills seen in people infected with malaria.

Around half of the rhythmic genes lost their periodicity when the clocks of the parasite and mouse fell out of synchrony. Likewise ; in a lab dish, human malaria parasites cultured without timing cues also displayed some degree of daily rhythmicity in gene expression. One of these genes coded for a receptor protein called SR10, which the researchers showed acts as a cog in the parasite's intrinsic clock machinery.

Without this protein, the usual 24-hour cycle of the rodent Plasmodium parasite became shorter, leading to defects in DNA replication and other cellular processes as well as protein breakdown. According to Subudhi, SR10 likely serves as a link between host circadian rhythms and the endogenous time-keeping ability of the parasite.

The KAUST researchers plan to dissect the molecular components of the SR10-mediated signaling pathway in search of novel drug targets. "Our work does not stop here," notes Pain. "Our next aim is to understand the chemical nature of the host-derived cues that the parasite receives to adjust its life cycle and its biological clock," he says.

Clocking in with malaria parasites 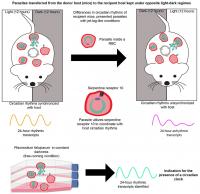