Research from Case Western Reserve University indicates sensory organs on the backs of flies not only provide information crucial to body rotation and flight maneuvers, but are essential to some species when climbing.

The findings suggest these mallet-shaped sensory organs, called halteres, may play multiple roles in how flies behave, providing clues to how brains absorb and use multiple streams of information.

The discovery has implications for human health and engineering, providing insight about how the sense of the body's movement in space is integrated with visual information, and serving as a model for sensors that could enable bird or moth-size robots to fly, climb walls or manage other challenging situations.

"Halteres are like our inner ear vestibular system, which helps us stay upright and stabilizes our eyes," said Jessica Fox, an assistant professor of biology at Case Western Reserve and an author of the new study, published online in the journal Biology Letters. "They let flies know where they are in space and allow them to keep their eyes focused on a target."

Flies, all 200,000 species, are the only animals with halteres, which evolved from their hindwings.

Members of the short-antenna group, including houseflies and hoverflies, consistently swing their halteres opposite, or at 180 degrees, to their wing flaps during flight.

The long-antenna group, which includes mosquitoes and gnats and evolved earlier than the short-antenna group, showed variability in flight and on foot. All the flies used halteres to fly, but some swung the mallets opposite their wings; others in synchrony with their wings and still others in patterns with no clear relationship to their wing flaps, or even with each other.

While walking, some brachycerans, like fruit flies and horse flies held their halteres steady, while others, like flesh flies and house flies, oscillated them in the same pattern as when flying.

"There's way more diversity of movement than we thought," Fox said. "but we didn't know why."

To study haltere use, the researchers recorded 41 flies from 26 families in super-slow motion. All flies, no matter the suborder, needed halteres to fly. Without them, they could at best lift off but quickly lost control.

In a series of pedestrian tests, all flies could walk without deficit on a stable, flat surface without halteres, indicating they received enough sensory information from their six feet to manage the task, the researcher said.

"When things are challenging, halteres matter for those flies that move them," Fox said.

Studying this system in flies can help researchers understand how the visual system and sense of balance works in humans, and also provide insight into sensory and movement disorders, Fox said.

"These biosensors can also be models for manmade sensors," she said. "They're solving the same problems humans do but with a smaller set of neurons. Sensors like the ones that flies have could enable flying machines to land more smoothly, or help them climb walls."

Halteres, essential for flight in all flies, are needed by some to climb walls 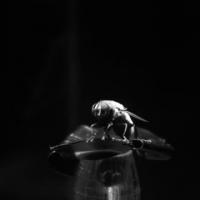 Hoverfly Lifts off with Halterers