You may not speak French, but if someone behind you in a forest shouted this, you'd likely understand and become instantly alert.

And according to a new report from Kyoto University's Hakubi Center for Advanced Research, the same thing happens in birds.

Previous reports have shown that animals with shared predators can eavesdrop on and respond to each other's calls, indicating that they can partly understand other species. Toshitaka Suzuki, publishing in Current Biology, noticed a similar phenomenon among two different bird species while conducting field studies.

"Many birds have specific alarm calls, warning others about a predator," explains Suzuki. "I was studying how a specific call of a small bird named the Japanese tit, Parus minor, evokes a visual image of the predator in their minds, in particular, a snake."

But he then observed that another bird, the coal tit or Periparus ater, also often approached the experimental area during these alarm calls.

"I wondered if these other birds also mentally retrieve 'snake' images from these calls. While they are in the same taxonomic group their calls are otherwise vastly different."

To demonstrate this, Suzuki set up an experiment under controlled conditions to investigate if the coal tits can anticipate and react appropriately even when they have not yet seen the predator in question. Snake-specific warning calls of the Japanese tit were played, and a stick was moved to mimic a snake gliding across the ground or up a tree.

"A variety of bird calls were played, but it was only the snake-specific ones which caused the coal tits to approach and inspect the stick," states Suzuki. "Additionally, when the stick was moved unlike a snake, such as in a rocking motion, none of the birds approached even when the warning calls were played."

These results show that the birds likely visualize a snake and react appropriately when they hear the snake-specific call from the other species, supported by visual confirmation. This work therefore represents the first evidence of visual search activity evoked via eavesdropping on another animal's alarm calls.

Suzuki intends to pursue this study to further explore how birds associate another species' calls with predators, hoping eventually to provide the basis for a new model for speech acquisition that may even be applicable to humans.

How do birds understand 'foreign' calls? 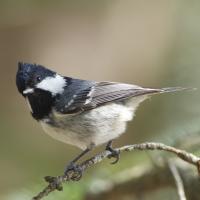