Arthropods (they of a hard outer-skeleton, like crustaceans, spiders, and insects) very often have larval phases that are completely different from the adults -- such as caterpillars and butterflies. Allegedly, one of the reasons crabs have been so successful is that their larval life habits (diet, locomotion, etc.) are decoupled from their adult life habits.

Most ancient fossils display a suite of "primitive" features, consistent with their early evolution and allowing them to be distinguished from their modern descendants. But the fossil described in this paper, despite its age, possesses a very modern morphology, indistinguishable from many crab larvae living today. "It's amazing, but if we did not know this was a 150-million-year-old fossil, we might think that it came from today's ocean," Dr. Martin said. "This came as quite a surprise to all of us."

True crabs are the most successful group of decapod crustaceans, with about 7,000 living species known. This success is most likely coupled to their life history which includes two specialized larval forms, zoea and megalopa. The new fossil is of the latter larval type (the megalopa), and it is the first such fossil ever reported. True crabs as a group are comparably young, starting to diversify only about 100 million years ago (mya), with a dramatic increase in species richness beginning approximately 50 mya -- though the early evolution of crabs is still very incompletely known. 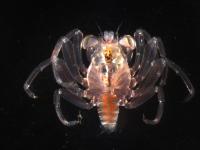