A recent scientific expedition to the Danger Islands, a remote group of tiny islands along eastern side of the Antarctic Peninsula, used new technologies to discover and survey a breeding colony of over one and a half million penguins.

Michael Polito, assistant professor in the department of Oceanography and Coastal Sciences at LSU, and co-authors detail their findings in a study published in the journal, Scientific Reports, on March 2, 2018.

"In 2006, I had the chance to visit one of the Danger Islands and was amazed by the sheer number of Adélie penguins I saw. The water around the island boiled with penguins. But with only two hours on land it was impossible to estimate the size of the population before sea ice conditions forced us to leave," Polito said.

In 2014, satellite imagery analyzed by study co-author Heather Lynch, associate professor of ecology & evolution at Stony Brook University and others indicated that large colonies might be present on all of the Danger islands.

"I thought, holy cow, there are not only colonies, but huge colonies of some sort of penguin. How did we miss this really obvious thing?" Lynch said.

This lead a team of researchers from LSU; Oxford University; Stony Brook University; Northeastern University; and the Woods Hole Oceanographic Institution, or WHOI, to mount an expedition to the islands in 2015. Using multiple simultaneous counts on the ground, quadcopter-based aerial photography and high-resolution satellite imagery they found that the Danger Islands have 751,527 pairs of Adélie penguins, more than the rest of the entire Antarctic Peninsula region combined. This discovery means these islands include the third and fourth largest Adélie penguin colonies in the world.

"The results of our study indicate that not only do the Danger Islands hold the largest population of Adélie penguins on the Antarctic Peninsula, they also appear to have not suffered the populations declines found along the western side of Antarctic Peninsula that are associated with recent climate change," Polito said.

Obtaining this first ever count of the population of penguins on the Danger Islands offers a valuable benchmark for future change and will help researcher understand how and why climate change affects this species, noted Stephanie Jenouvrier, a seabird ecologist at WHOI and co-author of the study.

"The population of Adélie penguins on the east side of the Antarctic Peninsula is different from what we see on the west side, for example. We want to understand why. Is it linked to the extended sea ice condition over there? Food availability? That's something we don't know," said Jenouvrier.

Because the Danger Islands have such a large population of penguins they are likely to remain an important location for this species under projected climate change. As such the team believes they deserve special consideration in the negotiation and design of Marine Protected Areas in the region.

"The size of these colonies makes them regionally important and makes the case for including them in the proposed Weddell Sea Marine Protected Area," said Tom Hart, a researcher at Oxford's Department of Zoology and co-author of the study.

For more information on the LSU College of the Coast & Environment, visit http://www.lsu.edu/cce/.

The full paper citation is: Multi-modal survey of Adélie penguin mega-colonies reveals the Danger Islands as a seabird hotspot, as featured in Scientific Reports.

Scientists use satellites and drones to discover Antarctic penguin 'super-colonies' 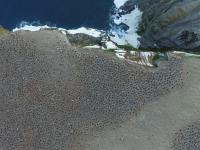