Researchers at the Institut national de la recherche scientifique (INRS), in collaboration with American scientists, have uncovered a new parvovirus strategy for reaching the cell nucleus which is their site of replication.

This new method of entry is a good example of host-driven evolution. Their results were published in the journal Proceedings of the National Academy of Sciences of the United States of America. The parvoviruses are extremely contagious and persistent in the environment. They are transmitted mainly through the feces of a contaminated animal. They can infect invertebrates, vertebrates, mammals and humans. To reach the nucleus of host cells, parvoviruses use mostly enzymatic reactions. They are first absorbed by the cell inside a vesicle, a membrane compartment. To escape, parvoviruses activate a viral enzyme domain called phospholipase A2 (PLA2), a key mechanism discovered in 2001 by the same INRS laboratory.

However, some types of parvoviruses, as well as other nonenveloped viruses, do not have this enzyme domain and must therefore escape from the vesicle by some other means. Using molecular biology and structural studies, INRS researchers have discovered that a new virus targeting the giant tiger shrimp uses a more mechanical response. This type of parvovirus contains an inner pentamer helix bundle held together by calcium ions. When the microorganism is in the vesicle, where the calcium concentration is decreased by the elimination of toxic substances, the bundle is released and opens-up the protein shell (capsid) enclosing its genetic material and the membrane, allowing viral DNA to escape into the nucleus for replication.

“It turns out the incorporation of a PLA2 enzymatic domain is only one strategy, even as far as the family of parvoviruses is concerned. Here, we show yet a new strategy that may not be limited to one parvovirus lineage, but to other economically very important parvoviruses, such as parvoviruses of domestic fowl and farmed mink,” says Judit Pénzes, a former postdoctoral fellow at INRS and first author of the paper published on August 18, 2020.

INRS Professor Emeritus Peter Tijssen, lead author of the publication, raises another interesting point: the host-driven convergent evolution of this method of entry into the cell. “Two parvoviruses with different DNA sequences, which both targeting shrimps, have adopted similar strategies for reaching the nucleus,” he says.

Using a microscope nearly two floors high, the FEI Titan Krios, Judit Pénzes was able to solve the complete structure of the virus on a near-atomic scale. “You could already feel the energy rumbling through the enormous machine upon entering the facility. I think that it’s probably the same to what scientists involved in space exploration must have felt when they saw a rocket ready to lift off for the first time,” says the postdoctoral student.

Eventually, the discovery of this mechanism could lead to a better understanding of how viruses enter cells and even to a cure. “If we know how the parvovirus manages to release its DNA into the nucleus of the host cell, we can try to find a molecule to block this action,” concludes Professor Tijssen. The collaboration with the Florida-based research team will allow them to deepen the knowledge on this subject and possibly find other methods of entry that are yet unknown.

The researchers received financial support from the Natural Sciences and Engineering Research Council of Canada, the National Institutes of Health (NIH) and the College of Medicine of the University of Florida. https://www.pnas.org/content/117/33/20211

INRS is a university dedicated exclusively to graduate level research and training. Since its creation in 1969, INRS has played an active role in Quebec's economic, social, and cultural development and is ranked first for research intensity in Quebec and second in Canada. INRS is made up of four interdisciplinary research and training centres in Quebec City, Montreal, Laval, and Varennes, with expertise in strategic sectors: Eau Terre Environnement, Énergie Matériaux Télécommunications, Urbanisation Culture Société, and Armand-Frappier Santé Biotechnologie. The INRS community includes more than 1,400 students, postdoctoral fellows, faculty, and staff.

A new strategy of cell entry for some types of parvoviruses

Journal
Proceedings of the National Academy of Sciences
Funder
College of Medicine of the University of Florida, ,
DOI
10.1073/pnas.2008191117 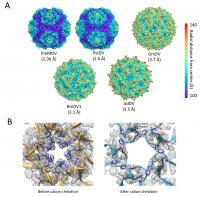