WOODS HOLE, MASS.--Marine animals that swim by jet propulsion, such as squid and jellyfish, are not uncommon. But it's rare to find a colony of animals that coordinates multiple jets for whole-group locomotion. This week in Nature Communications, scientists report on a colonial jellyfish-like species, Nanomia bijuga, that uses a sophisticated, multi-jet propulsion system based on an elegant division of labor among young and old members of the colony. This locomotive solution, the team suggests, could illuminate the design of underwater distributed-propulsion vehicles.

"This is a highly efficient system in which no developmental stage is wasted," says lead author John H. Costello of Providence College, an Adjunct Scientist and Whitman Center Investigator at the Marine Biological Laboratory (MBL) in Woods Hole. The young members at the leading end of the colony's propulsive unit use their little jets for turning and steering, Costello's team found, while the older, bigger members further back provide powerful thrust as the colony migrates from deep to surface ocean.

"It's a quite sophisticated design, for what would seem like a simple arrangement," Costello says.

N. bijuga belongs to a group of colonial organisms, called physonect siphonophores, that are related to jellyfish, anemones, and corals. Voracious predators of plankton, the physonects come to the ocean surface at night to feed and return to darker depths during the day, presumably to avoid visual predators such as fish.

The jet-producing members of the physonect colony, called nectophores, are genetically identical clones arranged in a propulsive unit called a nectosome. The nectosome is only a few centimeters in length, but it tows behind it much longer groups of reproduction and feeding units over distances that can reach 200 meters a day. It's the equivalent of a human adult running a marathon every day while towing the equivalent of its body mass behind it.

To analyze this swimming prowess, the scientists videotaped physonects off of Friday Harbor, Washington, and then used image analysis (laser light sheet illumination) to measure particle flows around the colony as it moves. This revealed the size and thrust of individual jets, along with their angle relative to the animal's axis. The youngest individuals, they found, pushed out the least amount of water with their jets. But because they are positioned at the tip of the nectosome, far from where the nectosome connects to the rest of the colony, a small, directed force by these young members has a big effect on turning the whole colony.

"The young members have what we call a long lever arm," Costello says. "They are like the handle of a door. If you push on a door near its hinges--its axis of rotation--the door is hard to open. But if you push on the door handle, which is far from the axis of rotation, the door opens easily. A little force placed with a big lever arm has a big effect on turning."

The young colony members allow N. bijuya to rapidly alter course and even completely reverse its direction of swimming. As new nectophores are budded at the tip of the nectosome, the older ones move farther back, where their larger contractions are useful for thrust. "These patterns permit all members of the colony to make important contributions to the propulsion and maneuvering traits that are critical for the success of N. bijuya in its natural environment," the authors write.

"Just because the young ones are small," Costello says, "it doesn't mean they aren't important." 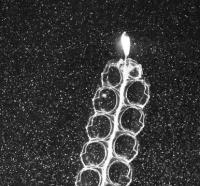