Root systems are the basis of the second Green Revolution, and the focus on beans and corn that thrive in poor growing conditions will help some of the world's poorest farmers, according to a Penn State plant scientist.

"Africans missed the Green Revolution of the '60s because they typically do not eat wheat and rice, which was its focus," said Jonathan Lynch, professor of plant nutrition.

The First Green Revolution was an effort to create dwarf wheat and rice plants that could prosper with more fertilizer. While this approach worked in Asia and other places where rice and wheat are the staple crops, it did not affect Africa.

With no money, no credit, no markets and a population that cannot read, African subsistence farmers need another, less expensive and less complicated approach -- one that does not require irrigation or fertilization.

"African farmers are poor and fertilizers take fossil fuels to manufacture," said Lynch. "A pound of fertilizer in Malawi costs ten times more than it does in Europe. With an average daily wage of $.80 it is not realistic for African farmers to buy fertilizer."

For 25 years, Lynch worked on beans that can thrive in low phosphorus soils. Phosphorus is the nutrient most important for healthy bean plants. The key to this approach is the root system. Phosphorus in the soil remains near the surface, but most commercially available bean plants had roots that grow down deep into the soil, swiftly growing past the phosphorus rich zone.

"People were skeptical about this approach," said Lynch. "They questioned whether growing beans without added phosphorus would simply increase soil degradation."

In fact, while the plants do remove phosphorus from the soil, more phosphorus was being lost to erosion due to sloping fields. Healthy, leafy plants prevented erosion, and the soils were generally better than with poor quality deep-rooted plants. Decreasing erosion by two to three times easily made up for what the plants removed.

After his work with beans, the McKnight Foundation asked him to look at soybeans.

"Our partners in China now have seven soybean lines with shallow root systems that are good for poor soils low in phosphorus," said Lynch.

Because any shallow rooted plant is more susceptible to drought, Lynch suggests that the shallow-rooted beans be mixed with deep-rooted plants to ensure some harvest in every season.

"We are not creating a monoculture; multilines of seeds are actually the best approach," said Lynch.

While beans are an important crop in poor countries, corn is the biggest crop in the U.S. and in the world. Corn or maize requires an enormous amount of nitrogen to grow properly and half the nitrogen is wasted.

"The plants do not take it up and it ends up in the groundwater," said Lynch. "Or it becomes nitrogen oxides, which are 300 times more detrimental greenhouse gases than carbon dioxide.

Because nitrogen moves very quickly through the soil, it outpaces maize roots. Lynch looked for maize that had rapid deep root development, but large amounts of roots are costly for plants to manufacture.

"We knew that in flooded areas plant roots develop aerenchyma," said Lynch. "Roots with these hollowed out portions are less costly metabolically for the plants to produce."

Roots with aerenchyma are also better during droughts because they can produce deeper roots to acquire moisture from dry soils.

Currently, Lynch has about 20 people looking at plant roots from thousands of maize lines. Once the researchers identify the best lines, genetic evaluation will identify the key traits for this type of root, with the hope of developing maize lines that are better at using nitrogen and more drought tolerant. 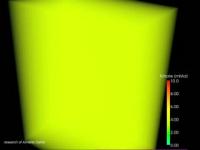 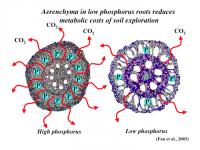