The consumption of wild cereals among prehistoric hunters and gatherers appears to be far more ancient than previously thought, according to a University of Calgary archaeologist who has found the oldest example of extensive reliance on cereal and root staples in the diet of early Homo sapiens more than 100,000 years ago.

Julio Mercader, holder of the Canada Research Chair in Tropical Archaeology in the U of C's Department of Archaeology, recovered dozens of stone tools from a deep cave in Mozambique showing that wild sorghum, the ancestor of the chief cereal consumed today in sub-Saharan Africa for flours, breads, porridges and alcoholic beverages, was in Homo sapiens' pantry along with the African wine palm, the false banana, pigeon peas, wild oranges and the African "potato." This is the earliest direct evidence of humans using pre-domesticated cereals anywhere in the world. Mercader's findings are published in the December 18 issue of the prestigious research journal Science.

"This broadens the timeline for the use of grass seeds by our species, and is proof of an expanded and sophisticated diet much earlier than we believed," Mercader said. "This happened during the Middle Stone Age, a time when the collecting of wild grains has conventionally been perceived as an irrelevant activity and not as important as that of roots, fruits and nuts."

In 2007, Mercader and colleagues from Mozambique's University of Eduardo Mondlane excavated a limestone cave near Lake Niassa that was used intermittently by ancient foragers over the course of more than 60,000 years. Deep in this cave, they uncovered dozens of stone tools, animal bones and plant remains indicative of prehistoric dietary practices. The discovery of several thousand starch grains on the excavated plant grinders and scrapers showed that wild sorghum was being brought to the cave and processed systematically.

"It has been hypothesized that starch use represents a critical step in human evolution by improving the quality of the diet in the African savannas and woodlands where the modern human line first evolved. This could be considered one of the earliest examples of this dietary transformation," Mercader said. "The inclusion of cereals in our diet is considered an important step in human evolution because of the technical complexity and the culinary manipulation that are required to turn grains into staples."

Mercader said the evidence is on par with grass seed use by hunter-gatherers in many parts of the world during the closing stages of the last Ice Age, approximately 12,000 years ago. In this case, the trend dates back to the beginnings of the Ice Age, some 90,000 years earlier.

Mercader's work was supported by the Canada Research Chairs program, Canada Foundation for Innovation, the Social Sciences and Humanities Research Council of Canada, the U of C's Faculty of Social Science and the National Geographic Society.

The paper "Mozambican grass seed consumption during the Middle Stone Age" will be available in the December 18, 2009 issue of Science at: www.sciencemag.org 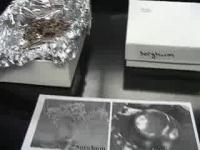