With woodpeckers, the answer's in the question--true to their name, they peck wood. And when they do, they peck hard--with each peck, the bird undergoes a force of 1,200 to 1,400 g's. By comparison, a measly force of 60-100 g's can give a human a concussion. The fact that a woodpecker can undergo fourteen times that without getting hurt has led helmet makers model their designs around these birds' skulls. However, a new study in PLOS ONE complicates this story by showing that woodpecker brains contain build-ups of a protein associated with brain damage in humans.

"There have been all kinds of safety and technological advances in sports equipment based on the anatomic adaptations and biophysics of the woodpecker assuming they don't get brain injury from pecking. The weird thing is, nobody's ever looked at a woodpecker brain to see if there is any damage," says Peter Cummings of the Boston University School of Medicine, one of the new study's authors.

To find the answer to this question, researchers used bird brains from the collections of the Field Museum and the Harvard Museum of Natural History and examined them for accumulation of a specific protein, called tau.

"The basic cells of the brain are neurons, which are the cell bodies, and axons, which are like telephone lines that communicate between the neurons. The tau protein wraps around the telephone lines--it gives them protection and stability while still letting them remain flexible," explains lead author George Farah, who worked on the study as a graduate student at the Boston University School of Medicine.

In moderation, tau proteins can be helpful in stabilizing brain cells, but too much tau build-up can disrupt communication from one neuron to another. "When the brain is damaged, tau collects and disrupts nerve function--cognitive, emotional, and motor function can be compromised," says Cummings.

Since excessive tau can be a sign of brain damage in humans, Farah and his team decided to examine woodpecker brains for tau build-up. The Field Museum and Harvard loaned the researchers bird specimens pickled in alcohol--Downy Woodpeckers for the experimental data and non-head-injury-prone Red-winged Blackbirds as a control. The researchers then removed the birds' brains--"The brains themselves were well-preserved, they had a texture almost like modeling clay," says Farah--and took incredibly thin slices, less than a fifth the thickness of a sheet of paper. The slices of brain tissue were then stained with silver ions to highlight the tau proteins present.

The verdict: the woodpeckers' brains had far more tau protein accumulation than the blackbirds' brains. However, while excessive tau buildup can be a sign of brain damage in humans, the researchers note that this might not be the case for woodpeckers. "We can't say that these woodpeckers definitely sustained brain injuries, but there is extra tau present in the woodpecker brains, which previous research has discovered is indicative of brain injury," says Farah.

"The earliest woodpeckers date back 25 million years--these birds have been around for a long time," says Cummings. "If pecking was going to cause brain injury, why would you still see this behavior? Why would evolutionary adaptations stop at the brain? There's possibility that the tau in woodpeckers is a protective adaptation and maybe not pathological at all."

So, woodpeckers show signs of what looks like brain damage in humans, but it might not be a bad thing. Either way, the researchers believe that the study's results could help us humans. For example, the knowledge about woodpecker brains that could help make football equipment safer for kids, says Cummings. On the other hand, he notes, "If the tau accumulation is a protective adaptation, is there something we can pick out to help humans with neurodegenerative diseases? The door's wide open to find out what's going on and how we can apply this to humans."

Farah notes that the study relied heavily upon the museum collections that the bird brains came from. "Museums are gateways to the past and a source of new innovation," he says. "The role of museums in this project was immense--we couldn't have done our study with just one woodpecker."

Ben Marks, the Field Museum's Collections Manager of Birds, said of the researchers' request to use the Museum's bird brains, "With one of the world's best bird collections, we're always trying to let people know what we have, why we have it, and what it can be used for. We get over a hundred requests for specimen loans every year--this one stood out because it was a novel approach that had real world applications. Some of the specimens used in this study were collected in the 1960s. Our staff cared for them for over 50 years before until they were requested for this study and used in a way the original collector couldn't even envision."

Woodpeckers show signs of possible brain damage, but that might not be a bad thing 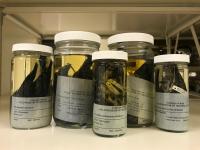 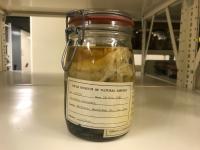