Scientists at DESY have set up the world's most precise 'metronome' for a kilometre-wide network. The timing system synchronizes a 4.7-kilometer-long laser-microwave network with 950 attoseconds precision. An attosecond is a quintillionth of a second, or a millionth of a millionth of a millionth of a second. Such installations can provide the beat for recording ultrafast X-ray snapshots of dynamic processes in the world of molecules and atoms. The German-US team around leading DESY scientist Prof. Franz X. Kärtner from the Center for Free-Electron Laser Science (CFEL) in Hamburg reports the achievement in the scientific journal Light: Science & Applications.

"Extreme timing accuracy is important for many areas of research," says PhD student Kemal ?afak from Kärtner's group, one of the lead authors of the paper. "For instance, challenging geodesy tasks require signal synchronization with picosecond precision, which is a trillionth of a second. High-precision navigation and multi-telescope arrays for astronomy need even a higher precision of up to 40 femtoseconds." A femtosecond is a quadrillionth of a second, or 1000 attoseconds.

Research centres like DESY working on X-ray free-electron lasers (XFELs) aim to take snapshots of ultrafast processes in the nanocosmos, for instance structural dynamics of biomolecules or chemical reactions. "X-rays provide excellent spatial resolution on the scale of atoms," explains ?afak. "The challenge is to achieve the necessary temporal resolution on the scale of attoseconds, where important molecular and atomic processes take place."

DESY's pioneering free-electron laser FLASH already features an impressive facility-wide timing precision of 30 femtoseconds. This is important for so-called pump-probe experiments, where a dynamic process -- a chemical reaction for instance - is started with one laser pulse and analysed with another laser pulse after a well-defined delay. Repeating the experiment with slowly increasing delay times yields a series of snapshots and creates a super slow-motion movie of the reaction or process under investigation. Without synchronization between the pulses, the dynamics cannot be resolved clearly in the movie.

"If we can achieve even better precision, this would promise radically new science by shedding light on molecular and atomic processes happening on the attosecond timescale. This is expected to revolutionize many research fields from structural biology to materials science and chemistry to fundamental physics," explains Kärtner, who is also a professor of Physics at the University of Hamburg and continues to run active research programs at the Massachusetts Institute of Technology (MIT), where he started to work on high-precision timing distribution systems more than a decade ago.

"Facilities like XFELs and laser-based attoscience centres require system-wide attosecond-level synchronization of dozens of optical and microwave signals, often over kilometre distances," adds Kärtner. For this purpose, the researchers have developed an optical timing distribution system that uses the ultralow-noise pulse train from a mode-locked laser as its timing signal. Using stabilized fibre-optic links, the timing signal is transferred over a long distance from a central location to multiple end stations, where efficient and robust synchronization is realised with remote optical and microwave sources.

By developing new ultrafast timing detectors and carefully suppressing fibre nonlinearities together with fundamental noise contributions, the scientists have been able to achieve a timing precision of 950 attoseconds in a 4.7-km long laser-microwave network for 18 hours. "To our knowledge, it is the first time that synchronization better than a single femtosecond has been achieved between distant mode-locked lasers and microwave oscillators on a facility-wide scale for an extended period of time," says ?afak.

"The attosecond-precision laser-microwave network will enable next-generation XFELs and other scientific facilities to operate with unprecedented timing accuracy, helping them to unfold their full potential," underlines Kärtner. "This will drive new scientific efforts towards the making of atomic and molecular movies at the attosecond timescale, thereby opening up many new research areas in biology, drug development, chemistry, fundamental physics and material science. Besides, this technique is also expected to accelerate developments in many other frontier research fields requiring high temporal resolution such as comparison of ultra-stable optical clocks, gravitational-wave astronomy and coherent optical antenna arrays."

Deutsches Elektronen-Synchrotron DESY is the leading German accelerator centre and one of the leading in the world. DESY is a member of the Helmholtz Association and receives its funding from the German Federal Ministry of Education and Research (BMBF) (90 per cent) and the German federal states of Hamburg and Brandenburg (10 per cent). At its locations in Hamburg and Zeuthen near Berlin, DESY develops, builds and operates large particle accelerators, and uses them to investigate the structure of matter. DESY's combination of photon science and particle physics is unique in Europe.

A video explaining the research is available on YouTube: https://www.youtube.com/watch?v=wi2n9VB9oc8 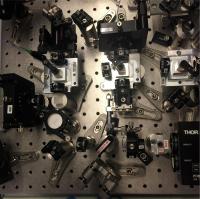