Sydney Grammar students, under the supervision of the University of Sydney and global members of the Open Source Malaria consortium, have reproduced an essential medicine in their high school laboratories.

The drug, Daraprim, had been the subject of controversy when the price was hiked from US $13.50 to US$750 a dose last year.

Daraprim - originally used as an antimalarial after its synthesis by Nobel Prize winner Gertrude Elion - is now more widely used as an anti-parasitic treatment for toxoplasmosis, which can be a dangerous disease for pregnant women and people with compromised immune systems, such as those living with HIV or AIDS.

Daraprim is listed by the World Health Organisation as an essential medicine.

In September 2015, Turing Pharmaceuticals acquired the market rights to Daraprim and raised the price of a dose more than 5000 percent overnight. CEO at the time, Martin Shkreli, stuck by the price, despite criticism including from US Secretary of State Hillary Clinton.

To highlight the inequity of the monopoly, high school students in Sydney have been working with the Open Source Malaria consortium to make Daraprim in the laboratory using inexpensive starting materials, as part of the Breaking good - Open Source Malaria Schools and Undergraduate Program.

Scientists anywhere in the world were able to view all the data generated and mentor the students to accelerate the science under the coordination from The University of Sydney's Dr Alice Williamson and Associate Professor Matthew Todd.

Dr Williamson from the School of Chemistry said the scientific community could provide advice and guidance to the students online in real time.

"The enthusiasm of the students and their teachers Malcolm Binns and Erin Sheridan was translated into a complete route in the public domain by the use of the Open Source Malaria platform," Dr Williamson said.

"Anyone could take part and all data and ideas are shared in real time."

Associate Professor Matthew Todd said the innovative open-source approach lowered the barrier to participation by researchers outside traditional institutions, such as universities and pharmaceutical companies, allowing students to work on real research problems of importance to human health.

"Daraprim may be quickly and simply made, bringing into question the need for such a high price for this important medicine," Associate Professor Todd said.

The findings were presented at the 2016 Royal Australian Chemical Institute Organic One Day Symposium today.

Open Source Malaria is supported by the Medicines for Malaria Venture and the Australian Government, as well as by an international network of contributors. 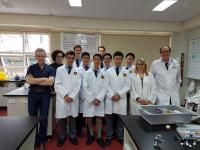 The Team that Did It